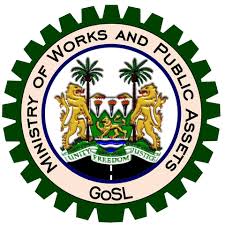 The Ministry of Works and Public Asset has on Monday 30th September, 2019 presented their budget to the ministry of finance in collaboration with the ministry of planning and economic development, Civil Society, budget advocates and the media at the mitts conference hall, touting building, Freetown

The ministry that is charged with the responsibility of managing public works including government buildings and residential quarters called on the ministry of finance to ensure that a realistic, timely allocation of funds to enable them delivered on their deliverables

According to the ministry, they are intend to transform the New England Ville that currently hosted 13 Ministries, Departments and Agencies to an Ultra-modern civil service complex and also transform the old PWD compound in Freetown to a multipurpose commercial works yard in line with the theme of the budget consultative meeting- Fiscal consolidation for job creation and human capital development among other things was the reason why they exceeded the 12.6 billon budget sealing.

During their budget presentation, the above mentioned ministry stated that in 2019, they have set up works project and implementation unit with temporary staff, establishment of a facility management directorate to minimize physical disasters and develop a concept policy on a works electronic clearer system that is presently with the ministry of planning and economic development.

Within the first half of 2018 to 2019, the ministry pointed out that they have refurbished the presidential lounge in Makeni, Kabala, Kenema and the Lungi Airport respectively.

It was also disclosed that the country’s has lots of physical assets that have over the years converted to personal properties.

They noted that the ministry intend rehabilitate 250 government quarters to ease up the stress of housing issues to civil servants.

Concerns from the ministry also have it that most of the the warehouses occupied by the ministry of health and sanitation are under rent.

The minister Peter B. Conteh disclosed that he inherited a disorganized, corrupt and weak ministry

He called on citizens to be patient as the New Direction government is not embarking on political roads but strategic road.