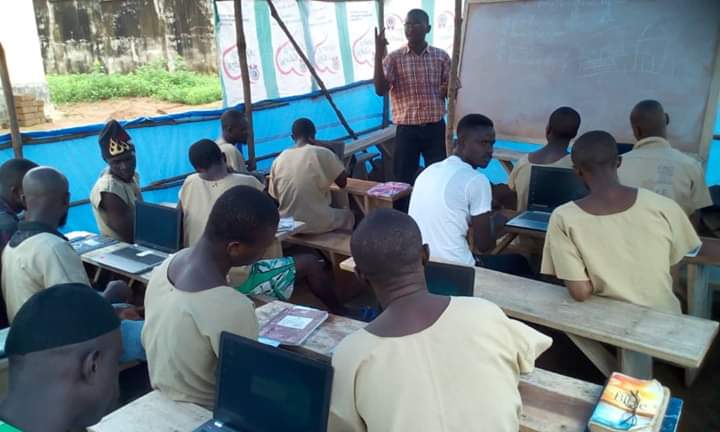 The University of Makeni (UniMak) “is currently conducting examinations” for inmates at the Makeni Correctional Centre, according to the Officer- in- Charge of the Centre Superintendent Salieu Sulaiman Turay

It could be recalled that in August 2019, Unimak and the Sierra Leone Correctional Service (SLCS) signed a memorandum of understanding which enabled Unimak to commence certificate courses for inmates at the Makeni Corrections Facility.

The courses include: Information Technology, Agriculture, Community Development Studies, Psychosocial Counselling, and Entrepreneurship; each of the courses lasts for six (6) months. At the end of their exams, an authority from the UniMak, said a graduation ceremony will be held.

Supt. Turay said that fourteen (14) inmates were involved in the capacity building project, adding UniMak had taken “a bold step” by endeavoring to render assistance in inmates’ rehabilitation.

“Neither the SLCS nor any other entity is giving Unimak anything for the gesture; they are doing it out of goodwill. In fact, whenever the inmates have I.T classes, Unimak comes in with laptops for each of the inmates, for ease of learning.

He revealed that he had succeeded in pleading with the UniMak to also introduce adult literacy classes, opining that a lot of inmates commit crimes because they were illiterates and had no skill, which could enable them, abstain from the ways of crime.

The Director General of the SLCS- Mr. Joseph Lamboi emphasized that education was a vital force in the reformation of fallen men and women, pointing out that its tendency “is to quicken the intellect, inspire self-respect, excite to higher aims, and afford a healthful substitute for low and vicious amusements”.

“My appreciation to Unimak cannot be expressed in words. They have taken the lead in helping us in the rehabilitation of inmates. We call on other universities to do same.”