UNCLE PEL TO WASHINGTON… …the rise of a People centered Journalist 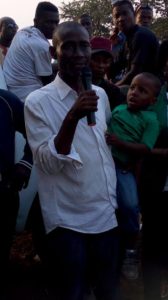 PEL-Prince Ensah Lahai Koroma appointed to Washington as Press Attaché is another popular decision of the Bio administration. It is a drift from the past to reward service and competence. I am here challenging anyone that can say the contrary-to the effect that PEL cannot make Sierra Leone proud.

Two dominant factors ought to inform the choice of who is appointed to the enviable position. What skill set is the appointee bringing to the task of navigating between diplomatese and journalese in panache. Then the cruciality of how certain are we that the appointee shares our political ethos and cannot be snitch down the line comes to mind. PEL fits the two requirements highlighted.

So from hindsight it is possible to see the son of Chief, maternal and paternal heir apparent, found himself in the newsroom where we as cub reporters under the tutelage to one of Sierra Leone’s best journalists Christian Keilie, charted a career pathway that has turned out to be uplifting.

That year 2000-2001 four of us from Salone Times opted for enrollment at the mass communications school Fourah Bay College. Only PEL and I crossed the grueling diagnostic test. And so we bonded on campus for the two years program. The chemistry jelled; we served as mutually reinforcing giants whose sway among other colleagues was irresistible. It has to do with classroom and out of classroom performance that made us highly sought after. We had rudimentary journalistic practice edge above others that were just coming from high school. But the class was made of very brilliant colleagues and an air cut-throat competitiveness pervaded our walls.

For PEL and I, we laid premium on mastery of the English. It was a cue for all of us as the lecturer of the communications skills of quintessential standing, Mammy Palmer reechoed it, drilling us through some arcane mechanics of grammar that left us at sea drifting like scums on the surface of an ocean. In that case we need to congeal our fibers, finding your kind to make a solid form in handling delicate tool of our trade, English language. And why not? English was a course delivered by the most pedantic and an uncompromising teacher. We had the story about how many students had flunked the course and were sent down to practice for a year before joining the next cohort of diploma students.

Mind you we were doing twelve subjects then-ten core media, two electives and a foundation course. We faced other challenging courses as in theories of mass communications that was handled by a hard to satisfy lecturer Joshua Nicol, Josephus Brima with his perplexing handling of symbolic logic that we found very torturing. We savored the expertise and energy of the Nigerian head of mass communications that treated some five courses, Daniel Ikem in whetting our appetite for professional journalism.

The fear of not crossing over to the next level of the diploma program when you fail one course or could not make the obligatory 55%; when all other departments doing less courses three needed 40%. So PEL and said it was disgraceful prospect and we had to plod on, coming from a war context. We took the fighting spirit of warriors to Kandahar, a bushpath contrivance from the dreariness of the Fourah Bay college Library to find solace close to nature in an overdrive to over-read all there was to know about journalism. Soon the mountain fringes of our own Kandahar became an intellectual rendezvous overlooking Freetown, where many things happened from the mundane to the sublime; all because we wanted to keep head above water.

In a polarized political atmosphere that we encountered following the lifting of a ban on students politics, between black and white camps in 2001, PEL was the choice of candidate in department election representing the white camp. He ran against now Dr. Tonia Musa who heads the mass communications department. Dr Musa won when the only female candidate June Rose Johnson at the last minute threw her weight to Dr. Musa in furtherance of a ‘black’ scheme- we can do it any how. I was then the secretary to the elections committee and it was an open book where my loyalty was in that keenly contested election. At some point Tonia Musa expressed outrage that I was manipulating the process to have PEL elected. We got over that acrimony very fast.  Musa appointed me thereafter as editor of the department press; and all of us-inclduing PEL, Dillet, Tamba Borbor, Yerra Mansaray, Saumua, Pat Mackeroni, Jabati etal….hibernated in the trenches of Kandahar to have stirred the curiosity of female colleagues like Glenis Frazer who wanted to have a feel of that esoteric reality of professional media grooming in very difficult post ear environment. To be continued…