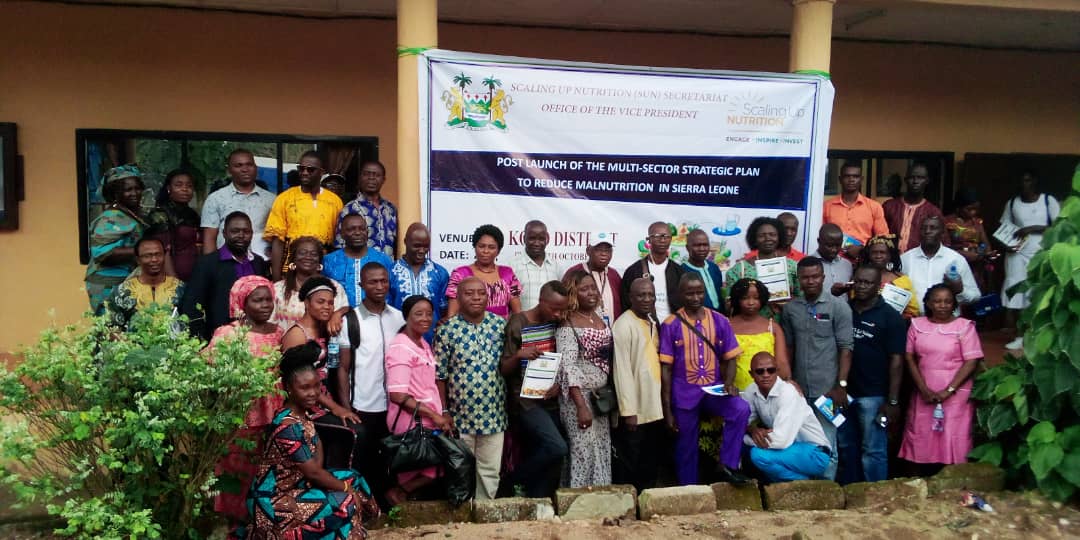 In an effort to reduce malnutrition in Sierra Leone, officials of Scaling Up Nutrition (SUN) and their partners have just concluded a second phase week-long multi-sector strategic plan (MSSP) in the provinces.

Subsequently, SUN Secretariat embarked on a nationwide popularization of the plan in order to yield the desired result.

SUN Secretariat held series of fruitful meetings in Kabala, Magburaka, Makeni in the Northern Region and Kono in the Eastern Region, where Civil Society Organizations (CSOs), UN, private and public officials, were in attendance.

While launching the MSSP in Kono, the District Medical Officer, Dr. Gerald Young said there are two types of malnutrition which are over nutrition and under nutrition but emphasis are just being placed on under nutrition.

He said that malnutrition is a reality in Sierra Leone that places an intolerable burden in the minds of people especially women and children.

To address this, Dr. Young said that lots of things and approaches have to be adopted from various experts in order to be able to create leadership for the people and advocate on their behalf.

He said that coordinated efforts and collaboration from both national and global levels are needed to access fund that will combat malnutrition in the country.

He noted that for Kono, some surveys have been conducted in 2010, 2014 and 2017 with undernutrition being the reason for stunting and wasting.

He encouraged women to adopt the habit of exclusive breastfeeding and urged men to support their women financially and morally in order to save the child from malnutrition.

Victoria Sandy, Senior Assistant Secretary in the Office of the Vice President, said to reinforce government’s commitment in reducing malnutrition, there should be a strategic partnership and enhanced collaboration among various partners and stakeholders.

“We must also invest and support nutritional activities to achieve the Sustainable Development Goal (SDG) II which is to “End Hunger, achieve food security and improve nutrition, and promote sustainable agriculture”. Good nutrition is a basic building block for human capital and as such, contributes to economic development,” she said.

She called for coordination, integration and collaboration, we must implement MSSP in all districts and government should mobilize resources and to shows it political commitment to the sector so in the future our children will be relevant and become better people in our communities and the country.

SUN National Coordinator, Nenneh Bah Jalloh, said that the aim of the provincial visit was to popularize the MSSP document in the 15 districts, adding that it would help implementing partners to know and understand its contents in order to use it in their work from 2019 to 2025.

She said that this will also give nutrition stakeholders the opportunity to take ownership of the document and disseminate the messages in it to all chiefdoms and villages.

SUN Technical Officer, Bernadette Allieu, said the MSSP book contains key strategic components such as nutrition specific, nutrition sensitive and nutrition governance, adding that all of the above mentioned are geared towards improving health, food and nutrition in the country and also called on women to prioritize agriculture.

Dr. Suleiman Sowe, Coordinator of the Renewed Efforts Against Child Hunger and Under-Nutrition (REACH), said malnutrition causes 15% damage of a child’s brain as children with malnutrition achieve less in education because the first 1000 days of a child’s development has been destroyed by his or her parents.

He said education and nutrition must work together so that the country’s GDP must be realized.

He said that Sierra Leone is among 61 countries that they are supporting and nutrition is very vital because it cuts across all sectoral development with link in agriculture, health, productivity and economic prosperity.

“If a country has a lot of malnourished people there is a risk that it would affect the economy,” he reiterated.

Abu Daffae, Local Government Focal Person, said councils and their partners are giving the SUN Secretariat the needed support as they have their development and annual plan, which they renewed every three years.

“There are SUN Focal persons in every district. So, as a council, we always give ultimate support to SUN in reducing malnutrition,” he stated.

Sex for Grades: Students to testify