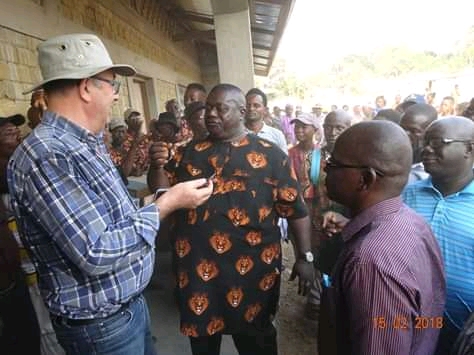 The Paramount Chief of Malen Chiefdom, Hon PCBVS Kebbie has repeatedly warned detractors mostly desperate politicians, misguided NGOs and the likes to leave Socfin alone and further encouraged the government of HE President Bio to redouble its ongoing protection of Socfin and other well-meaning investors with the view of revamping the economy.

Speaking in a nation-wide broadcast Hon PCBVS Kebbie underlined the company’s social commitment to higher standards and compliance to applicable laws and  that the operations of Socfin is an open door policy and absolutely has nothing to hide .

Responding to critical questions asked by visiting journalists the long serving Paramount Chief advanced the argument that the creation of long term employments with decent wages contributes significantly to the development of the countries in which Socfin Group operates adding that national legislations, standards and conventions refers to the same subject and that Socfin Group applies the Provisions most favorable to its employees.

Speaking further Hon PCBVS Kebbie stated that Socfin strictly commits to freedom of association and non-discrimination, bans forced and child labor amongst many others.

Earlier Chief Kebbie outrightly debunked the misguided expression that lands leased to the company were grabbed has been peddled all in the name of conspiracy theory most especially by desperate politicians working in association with money hungry NGOs .

For his part the Chiefdom Speaker SR Moiguah as usual profusely lavished praised adjectives on Socfin for leaving up to its CSR in the areas of education, cultivation of farm lands for both Upper and Lower Malen for four years going, helping in the health sector, road works, constructions of community Barry’s, water Wells and toilets, besides provisions of job opportunities for the growing population drawn from all four corners of Malen Chiefdom.

Rhapsody of Realities in Governance…. SLPP, APC to Rule Forever!!!