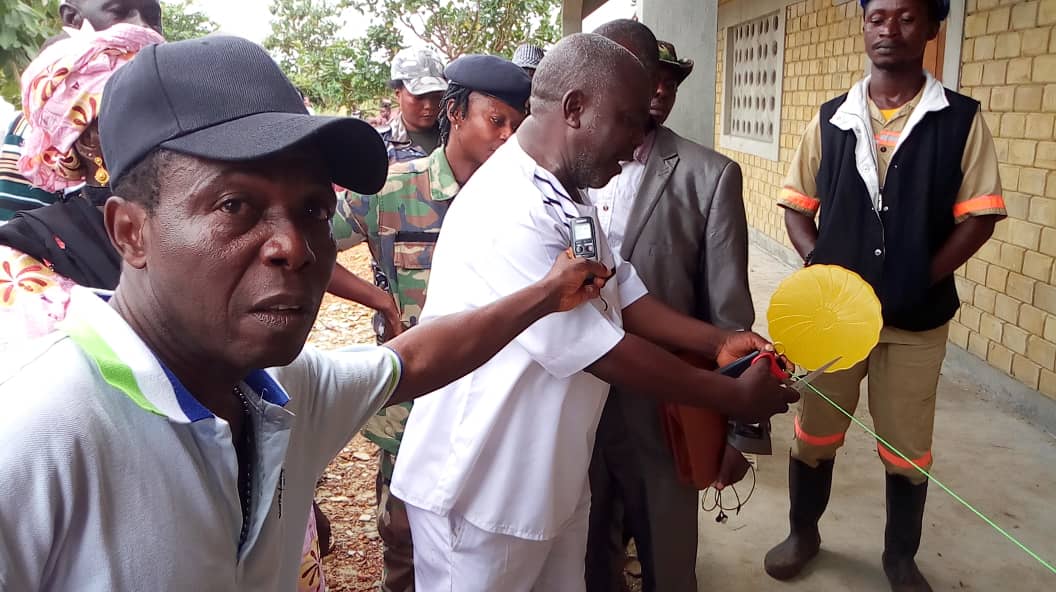 Socfin Sierra Leone has handed over a newly built , furnished four class room building with an office and a toilet  for the needy community people of Kotumahun, closed to the 27 million US dollars oil mill currently been extended from thirty tons to sixty tons per hour .

The construction of the newly built and furnished Pujehun District Council Primary school comes in addition to  similar Primary school structures built in Sijoe, Bendu and Mallay communities all within the oil plantation concession areas in less than four years period.

Handling over the building amid cultural dancing and singing marking an in impressive ceremony held in Kotumahun community Barry, also constructed by Socfin , Chiefdom Speaker SR Moiguah again commended Socfin and Hon PC BVS Kebbie for what he called positive  combination noting that Socfin is on record for always living up to its CSR .

The Chiefdom Speaker encouraged the people of Kotumahun and Malen Chiefdom to continue to hold Socfin in higher esteemed as it had always demonstrated the very best  .

The Chief Moiguah further said that Socfin is prepared to build a fence round the school for the protection of the children as the school is built on the back of river Malanie dividing Malen Chiefdom in the Pujehun District and Bum Chiefdom in the Bonthe District. And that Socfin has also agreed to provide electricity for Kotumahun and the surrounding villages.

Socfin he noted is poised to champion academic education in line with the aspirations of President Bio’s plan to once more remake Sierra Leone the Athen of West Africa.

Speaking on behaves of the District Director of Education and that of the Pujehun District Council Chairman , both the Supervisor of school Allicious Mallah and  Councilor Anthony Fortune lavished praise adjectives on Socfin for good works done and further encouraged the community people to continue to cooperate with Socfin for better developments.

Speaking further both speakers spoke about the importance of academic Education in relations to the Education ministry and that of the council.

They in turn reassured of their respective offices and called on the people to encourage their children to acquire good academic Education.

Mr. Mallah in turn presented set of school materials including bell, registrar, diaries chalk and the like for a start.

For their parts the Zonal Supervisor and the teaching service commissioner, Mr. Kamara and Mr. Anthony Lebbie warned all to make good use of the facilities and items and to work amicably with the community teachers who are not on payroll for now

Both the town chief Thomas Sama and the youth leader profusely thanked all inclusive of Socfin and the chiefs before reassuring all of their fullest cooperation.

Similar assurances and commendations we’re made by various others

Earlier the Laiasion Manager Mr. Joseph Belmoh and Mr. Kuyateh in charge of Education spoke of the need for better cooperation’s.

Mr. Belmoh on behalf of Socfin management once more reassured the community people of the fullest cooperation of Socfin noting that anything that requested by the Chiefs of Malen are automatically approved by Socfin .

In his opening address the chairman, Mr. Kalilu Fofanah who doubles as the Manager, Radio Malen praised Socfin and encouraged all to work with Socfin and to do all to stop the fruits theft which he stated can only negatively affects the CRS if not stopped