Lahai Kallon, an Okada rider in Kenema who has lost his right eye after he alleged to have been hit with the back hand of a road safety corp while attempting to remove the keys of his Okada.

The incident which took place around Kaisamba terrace is now a subject of police investigation, but before that when the rider was allegedly hit; a second officer was summoned to the scene by the arresting road safety corp. Report suggests that he pleaded with his compatriot to release the motor bike but flatly rejected by his opposite number and threatened to have the rider jailed.

The motor bike was taken to the police station after the rider complained a spark on his eyes when hit by the officer whose name was only given as AIG.

The bike was then taken to the police station and when the rider followed later he was arrested by the officer and taken to the traffic division to obtain statement and whisked to the magistrate court.

The officer asked for a date for the trial and the rider was sent to the correctional center without been granted bail, within few days his eye went so bad and was seen by the health officials at the Correctional Centre who raised concerns over the state of the eyes of the rider and requested for the presence of his family members.

The family were told of a cut in the eye that has been highly infected and would like to inform the parents that the damage was not done while in their custody and to avoid any further blame.

The poor rider was eventually taken to the eye department at the hospital where reports indicate the loss of the right eye due to corneal melting from severe bacteria kerato conjunctivitis (irreversible loss).

Report has been made to the CID and investigation is now in progress but we have been challenged with witnesses at the scene of incident and investigation has told me that they have allegedly been told by the offending officer not to make any statement to the investigator.

We’ve switched our attention to the medics at the correctional center to also make statement and serve as witnesses; meanwhile the police have been asked to invite the accused in this case to make statement on the alleged matter that is yet to make an appearance.

The bike rider will now begin the traumatic journey with life without one eye while every effort is made to protect the other which is gradually responded to treatment. He is suffering from very severe headache, highly inflamed eyes with highly infected fluid flowing and hardly sleeps at night. The world is a difficult place to live.

More on this story in our subsequent editions.

“I AM NOT A TRIBALIST: NATCOM IS A NATIONAL ENTITY”- NATCOM DG 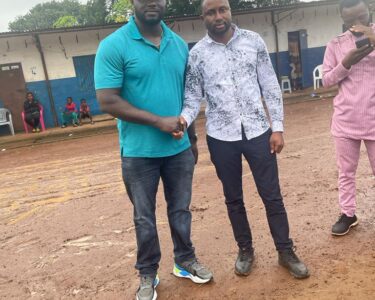