SLAWIJ, Legal Aid Board sign up to strengthen SGBV response 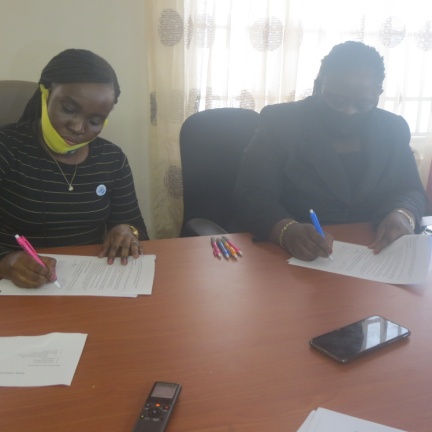 The Sierra Leone Association of Women in Journalism (SLAWIJ) in collaboration with the Legal Aid Board (LAB) has signed a Memorandum of Understanding (MoU) to further strengthen the response on Sexual Gender Based Violence (SGBV), Rape, Mental Health and other related issues affecting Women.

Held at the headquarters’ of LAB at Wilberforce street, on Tuesday, August 4th 2020, the objective of the MoU is all about changing the narrative to make a difference, to work together to promote and provide solutions to the many contemporary issues bordering on rape, domestic violence and SGBV, across the Country.

The agreement signed between SLAWIJ and LAB establishes the principles, guidelines and commitments of the two parties, which will guide the collaboration for an initial period of six months beginning August 2020 to January 2021.

Executive Director, Legal Aid Board, Fatmata Claire Carlton Hanciles (Esq) was delighted to be part of history noting that enough efforts is not being made by the women folk to give voice to those afflicted and affected, to get access to proper justice. She added that the time is now for the voices of the thousands who continue to suffer in silence as a result of the issues highlighted in the MoU to be heard and only the women can give support for this to happen. Madam Hanciles commended the executive of SLAWIJ for partnering with the LAB, noting that such partnership is the beginning of a new dawn between the two parties. She said as women media practitioners, SLAWIJ will use their own platform to ensure that women access justice which is the watch word of LAB. The LAB Executive Director, assured members of SLAWIJ that together with her team will provide expertise on legal advice and assistance to the programme FAMBUL BISNES.

Millicent Kargbo is the Executive President of SLAWIJ, in a brief statement affirmed that SLAWIJ and LAB will work together on a radio programme FAMBUL BISNES to be simulcast once a month in all major radio stations across the country and subsequently on television stations nationwide through SLAWIJ’s network. She added that the programme aims at strengthening response on women issues through practical investigative episodes and also true life testimonies of women leaders to serve as an inspiration and motivation to young girls and women, who because of circumstance has lost hope in society.

Publicity Secretary of SLAJ, Princess Gibson shared her view that Government through the Ministry of Information and Communication should be more proactive to ensure that legislators put in place sound laws to put an end to the many vulgarity and nudity in movies and music videos aired on radio and television stations, which she described as a bad example to children. She added that radio station managers as well as television executives should properly screen movies and music video before it is being aired, noting that music videos and audios for broadcast are specifically edited for broadcast; in order to safe guard the right of minors who consider such movies and music videos as cool and trendy.” This is where the problem starts right in the home and other public places that screen such videos. If women want to be serious about ending SGBV and rape, now is the time to use the FAMBUL BISNES platform to encourage the voiceless to come out and speak up and that perpetrators be fully dealt with, including anyone that would want to compromise or obstruct justice for survivors”, Gibson noted.