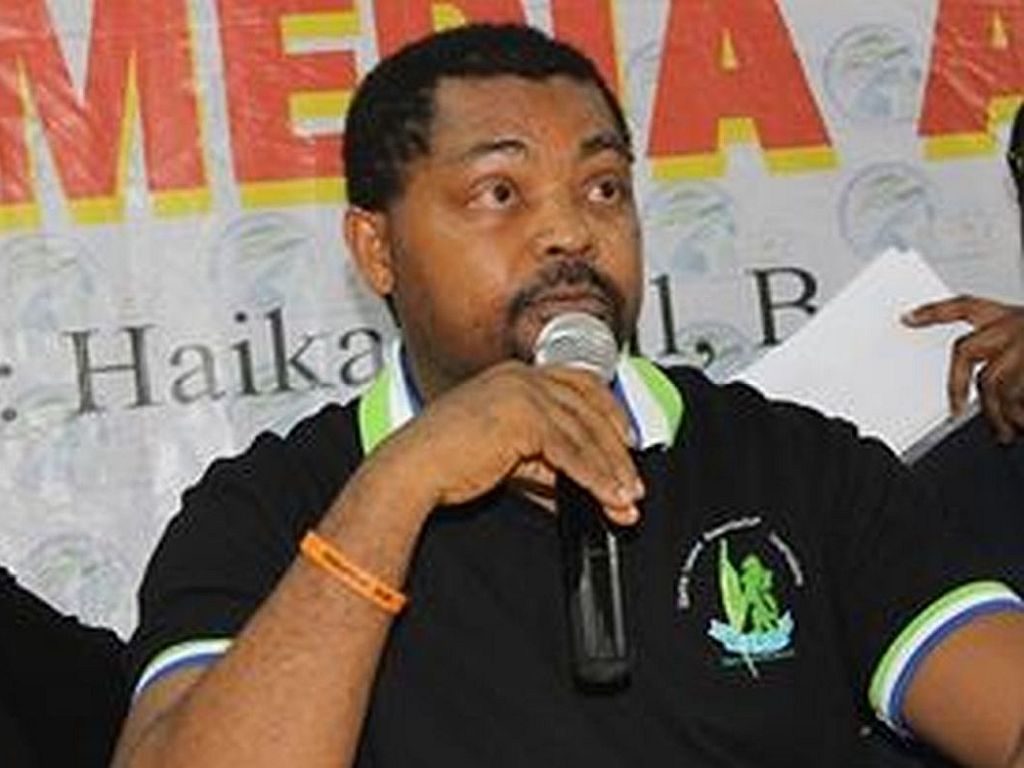 Let me start by thanking God Almighty for this day. It is so refreshing to see so many smiling journalists in the presence of our esteemed host, His Excellency the President, Dr. Julius Maada Bio.

As a matter of fact, this is an informal/social meeting between the first arm of government- THE EXECUTIVE- the CABINET, and the fourth arm- THE FOURTH ESTATE- the MEDIA.

Few African leaders, if any at all, have the bravery to romance with their local media as our President has been doing since he became President. And when you consider the backdrop against which he was elected, it is even more daring. His Minister of Information and Communications, who I will take the liberty to describe as the Idiomatic Squealer, was apt in his description of His Excellency when he said at a presser yesterday; and I quote: “He was the most vilified and most castigated flag bearer in the political history of Sierra Leone. He literally went to hell and back with reckless journalism”- End of quote.

Yet President Bio has demonstrated he is a firm believer in free press. The President has convinced his Cabinet to approve a repeal of the obnoxious criminal libel law. And for the purpose of this meeting, at least at this level, there is no criminal libel law: it has been repealed. So we are free to say (and write) whatever we feel and he’ll not budge a bit.

Yes, we can get away with so many things:

Like describing His Excellency as the FLYING PRESIDENT; ‘e nor de o, e don travel’; Bio airlines. Some media houses even went further to allege that our President likes to travel so much that he would call his colleague Presidents around the world inquiring if they had upcoming programs which he would like to attend.

We can even send a text message to the jovial, accommodating but no-nonsense Chief Minister cross-checking information, including whether the President’s next trip to the UN will include 50 journalists, and we will expect to get a prompt response.

Your Excellency, it is that time of the year when we are supposed to spread the news of good tidings, peace and hand out some gifts. Please do not misinterpret my words; I did not just say that we should expect gifts from the President. I believe we have been given the best gift already for this year, which is a Cabinet approval and a further commitment to repeal the criminal libel law.

However, I must reiterate Mr. President that “De gron is still dry.” We are waiting on the Minister of Finance for the “bread and butter” he promised us in the 2020 budget, but since it is not yet 2020 we will hold our peace.

But let me especially welcome our indefatigable First Lady and commend her for the ‘Hands Off our Girls’ campaign. We in SLAJ believe that the level of rape and violence against women and girls in Sierra Leone is shameful. Madam First Lady let me as President of SLAJ, and on behalf of all journalists, pledge here today that we will continue to do our utmost to support your campaign against rape, early child marriage and violence against women and girls, with all the resources and expertise at our disposal. We will continue to provide the platform for a healthy discourse and we will amplify the messages of dignity and hope for our women and girls.

However, Madam First Lady, I have been asked by some men, not journalists, to solicit your active support here today to help them launch a campaign of their own. Your campaign aims to protect girls. Madam, the proposed campaign by men is meant to target only young ladies, not girls. It is a December campaign which is highly gender sensitive. This is the festive season and as we continue to wait on the Finance Minister for the bread and butter to reach our breakfast tables, please helps the men launch the “Hands Off Our Pockets” campaign.

And lest I forget, Madam First Lady, I feel on top of the moon to inform you that five of our members, including a woman, have just got their PhDs in mass communication. We now have Dr. Williette James, Dr. Isaac Massaquoi, Dr. Tonya Musa, Dr. Abdul Rahman Swarray and Dr. Francis Sowa. We know you have issues with some PhD holders, but I can assure you that this crop of SLAJ academic doctors are very solid and they are available to help you deliver on your national campaign, particularly Dr. Williette James.

Your Excellency, with your permission Sir, we want to pay special tribute to the Honourable Vice President and to thank him for so ably deputising you as the key note speaker at our last Triennial General Meeting. Sir, even we who have been in the media all our lives were quite impressed at his analysis of “media poverty and poverty of the media”. He was blunt, incisive and above all very honest. Can we have a round of applause for the Vice President please.

Indeed, we now know that there are people in this government who properly understand the situation of the media and who are ready to honestly work with us to find a solution to our problems and help the media regain its lost glory and position itself firmly as an agent of national development. Mr. Vice President Sir we thank you again.

However, Mr. Vice President as an elder brother, this is just a piece of advice from a young admirer. The next time you want to worship please come to my church, I can assure you that if you meet Samura Kamara there, there will be no commotion. President Bio can attest to that.

But Mr. Vice President, we have a little score to settle. The last time we met, at the launch of the National Anti-Corruption Strategy, you responded to my argument on the FAILED STATE. I had no opportunity to reply. There was no VAR. And so it was one zero against SLAJ. Tonite, I will take the opportunity to equalise and I know you will not respond as you are not on today’s program to make a statement. Mr. Vice President, the Failed State may not be as bold or as glaring today as it was postulated in the 1990s and early 2000s. This is because it has metamorphosed into splinter groups or cabals, but equally undermining the efficient functioning of the legitimate State, making it unable to deliver on its mandate. These splinters are found in every sphere of governance and the private and non-governmental sectors. So until we meet again, Sir, it’s 1-1 on aggregate.

Anyway, on a more serious note, I want to again thank you, our host, Your Excellency President Bio for your commitment to repeal the criminal and seditious libel laws and for your continued tolerance and support to the media. And to your two able lieutenants at the Ministry of Information and Communications who are living up to the task of delivering on your Excellency’s commitment to a free and responsible media, I say thank you. I make this commendation in the face of real challenges on both sides. The President has told us that there are still a number of people who have issues with the repeal, but like a brave soldier leading his troop of Cabinet ministers, he has decided to soldier on regardless of the concerns. On behalf of SLAJ, I salute you Sir.

We believe as the Bible says in Luke 12:48: “To whom much is given, much will be required …” Indeed, the great expectation is that journalists will be more factual, ethical and responsible in their reporting. A few of our colleagues have to move away from character assassination and baseless rumours and focus more on development oriented stories with a view to helping our nation move forward.

We should help government’s development efforts, including the FQE, to succeed by monitoring its implementation across the country and report areas where it is succeeding; where there are gaps and challenges, we report these too while also presenting suggestions on how these can be addressed. Where we suspect corruption, we expose it with facts.

This is the kind of media I envisage in the post-repeal era. When the media wants change, they get it.

And in order to ensure the media behaves responsibly in this period leading up to the repeal of Part 5 of the Public Order Act and thereafter, SLAJ commits to holding its members to account. In this vein, it is my pleasure to inform you Mr. President, that we are in the process of strengthening the SLAJ Disciplinary Committee which will be tasked with the responsibility of monitoring our members and enforcing the SLAJ Code of Ethics.

And finally, Your Excellency, we save the best for last. I feel very honoured to have been given the great task, as President of SLAJ, to officially announce the list of Press Attache appointees to serve in our various Embassies and High Commissions across the world. However, I wish to respectfully decline the honour and crave your indulgence, Mr. President, to return this huge responsibility to you sir.

I thank you very much.

God Has Already Written the Final Chapter of Your Life