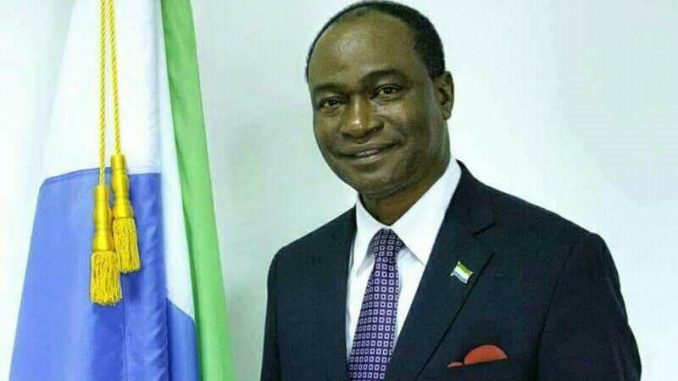 Supporters of the All Peoples Congress Party in Kenema and Kailahun district have registered their dissatisfaction towards the 2018 Presidential aspirant of the APC party Dr. Samura Kamara for showing less concern to them after the elections.

According to the supporters they have shown loyalty to the party for years, noting that Kenema and Kailahun district fought tooth and nail for the party to retain the 2018 elections; but Dr. Samura Kamara has never appreciates the strides and efforts we made during the electioneering process.

The National Executive and other party officials continue to derail the party membership in both Kenema and Kailahun district leaving space for the SLPP to take full advantage of the situation.

Sources close to The Guardian Post explains that since after the 2018 elections both the Eastern and national executive of the All Peoples Congress Party have not visits or acquaints with their membership on happenings  of the party in that part of the country.

“We are gradually turning into a laughing stocks, our situation is nothing to write home about as our political opponents continued to ridicule us,” they said.

“Our National Executive have neglected us since after the triumph of the Sierra Leone Peoples Party in the 2018 elections, these was not the bargain we have with comrade Samura Kamara and the APC leadership.”

“Some of our family members have migrated to other districts due to the neglects by the party leadership to sustain and uphold the party in the Eastern Region.

It could be recalled that several supporters of the SLPP joined the All Peoples Congress Party during the 2011-12 political calendar as part of the Koroma administration to lured SLPP supporters and other senior comrade in joining force with the APC for an outright victory in the 2012 elections.

“We’ve being calling Dr. Samura Kamara, Secretary General Foday Yansaneh and hosts of others but to no avail,” Foday Allieu from Kenema retorts saying that the supports of the APC in Kenema and Kailahun is gradually fading away as the SLPP are busy doing their homework ahead of the 2023 elections.

Further information coming from Kenema and Kailahun also alleged that the party office in Kenema is an eerie ground as supporters are afraid of visiting the party office for possible reprisal from other political opponents.

“Some of us spend our time and resources to see that the All Peoples Congress (APC) Party makes gain in both the 2007-12 elections.

Some of the supporters also highlighted the dubious role played by certain members of the party as anti-party activities during the 2018 elections involving some aspiring Members of Parliament like Hon. Borbor Sawyerr who according to our investigation was embarrassed and betrayed by senior party officials in the Eastern Region at against the wish of the party membership.

“The Party was overtaken with fifth-columnists,” they alleged.

“They benefitted a lot in the party but again turned up to be backstabbers and traitors to the detriment of the grassroots.

“Some Executive members were openly campaigning for independent aspirants instead of APC aspirants, these was not a secret it was done in Kenema and Kailahun districts.

They also accused the party hierarchy for failing to stand the test of time and allowing so much distraction from their political opponents.

Source close to the APC in Freetown made known to this medium that the party is in total control of its membership as all their political strategists is in place for 2023 elections.

“We are in total control of our membership, our tactful Secretary General has being in touch with our membership across the country, these complaints from some of our supporters are common especially in the stronghold of the ruling government.

Political commentators from the Eastern Region are of the views that the ruling Sierra Leone Peoples Party (SLPP) will end up lured 70% of disgruntled supporters of the APC in the eastern region.