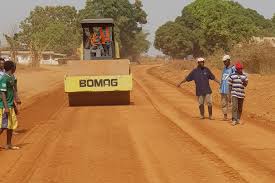 The Road Maintenance Fund Administration (RMFA) funded the rehabilitation of the 30 meters long and 4 meters wide bridge in the Lokomassama Chiefdom, Port Loko district. The bridge was declared completed and officially opened and handed over in a ceremony that was well-attended by the locals at the bridge site in the Mapeh Section.

In his opening remarks, the Development & Planning Committee Chairman of the Port Loko District Council, Ahmid Fofanah proudly said that the Council Chairman Ibrahim Bangura promised during his campaign to deliver several development projects, pointing out the just concluded Mapeh Bridge as a glaring example of a successful achievement. He recalled that this bridge before now was in a very bad state, rough and challenging to ply which crippled the free movement of persons, goods and services to that part of the district, thereby frustrating social and economic development in that part of the district. He stressed that the development of feeder road is very important for both fishing and agricultural activities of the people. He said the rehabilitated bridge links Gbaneh Bana to Kontayia Village en-route Bailor in the Loko Masama Chiefdom and connects Kaffu Bullom Chiefdom with 80 villages. He encouraged the natives to provide maximum security to prevent unscrupulous persons from misusing the bridge and its vicinity. He thanked the RMFA for providing the funds and the Port Local District Council for implementing the contract to its logical conclusion. The Regent Pa. Bangura of Loko Masama Chiefdom commended and expressed gratitude to both the Council and Central Government for resuscitating economic activities in his chiefdom through the maintenance of feeder roads.  He reiterated that before this time, the bridge was a death trap for his people. He said people preferred to use local canoes to ferry their goods and ways across. Making an overview of the project, the Chief Administrator explained that the Mapeh Bridge was identified among the numerous road projects at hand because of its socioeconomic viabilities. He said an appeal was made to the RMFA and Government for support, and their request was accepted. The Chief Administrator furthered that after the assurances of RMFA to fund the bridge project, the Council then hired the Tapeh Briwah Construction and General Supplies which was handed over to the community people before the commencement of implementation. He said the Mapeh Section is the biggest section and the bridge in question linking nearly 80 villages and its completion will bring great economic progress to the natives in the Loko Masama Chiefdom, Port Loko District. He then thanked the RMFA and locals for their contribution in making this dream come true. Ing. MariwanKallon, the Director of Planning, Programme, Monitoring & Evaluation, RMFA dilated on the importance of roads – including movements of people, goods and services; saying that access to health, education, airports, markets facilities etc. are crucial in the daily lives of the people. He said roads has the tendency to go bad till it is meant but bridges are exception.

The Contractor, Ing. Sydney B.M. Josiah of Tapeh Bruwal Construction and General Supplies said the bridge which was very dilapidated has been professionally rehabilitated, with replacement of materials that will last for the next 50 years. He called on the people to take care of the bridge. In her keynote address, the Resident Minister of North-west Region, Mrs. Haja Isata Abdulai Kamara explained that structural development such as this completed bridge will reduce the cost of transportation and cost of goods because more products will now be moved freely and quickly to the markets and big towns.  He linked this achievement to the willingness and astute leadership of HE President Julius Maada Bio.

Samura Kamara: The Man to Watch