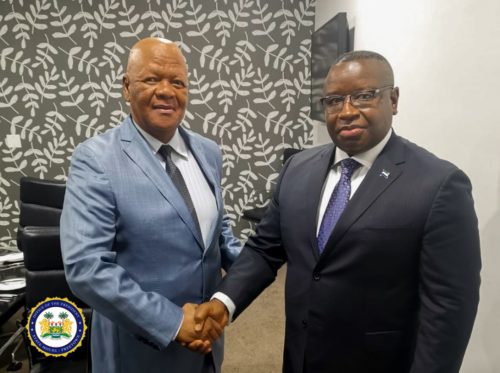 Jeffrey Thamsanqa Radebe conveyed the South African government’s plans to organise a delegation of investors to the resource-rich West African nation as soon as they get a date from Freetown. He is said to have told President Bio that the potential partners would be interested in small scale electrification, off-grid power and large scale mining.

Mr Radebe served as Minister in the South African Presidency from 2014 to 2018 after having worked as Minister of Justice and Constitutional Development from 2009 to 2014. He will assist in finalising the team, which he said would need to know about potential projects in those areas of interest and what Sierra Leone’s policy is around private-public partnership.

“We have accepted this meeting to better understand the investment opportunities within the Sierra Leone mining sector. Our specific interest is in base and precious metal opportunities,” he said.

The founder of Genesis Energy Holdings, with integrated operations across the industry value-chain of oil, gas and power in South Africa, São Tomé and Príncipe, Guinea Bissau, Benin and others, also held a meeting with President Bio.

Akinwole Omoboriowo II, a UK trained specialist in electricity prices and modelling, said they looked forward to opportunities in developing power plants that utilise numerous fossil fuels such as gas, diesel, HFO and renewable fuel sources such as hydro.