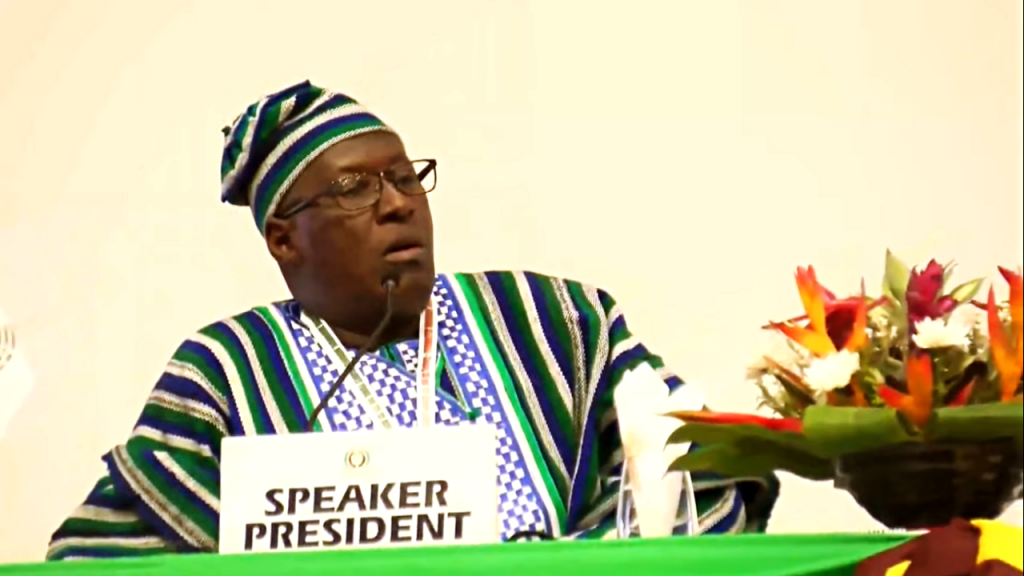 Congratulating the newly elected Speaker, Hon. Sahr Mathew Nyuma, the Deputy Leader of Government Business thanked the Leadership, Administration and Members of Parliament for their unwavering support towards the realization of this national objective. He confidently informed the House that Hon. Tunis has the potential and proclivity to take such a mantle of leadership; assuring he was going to do well by delivering on his set goals and objectives including transparency, stability and effective regional integration.

On his part, Hon Dr. Kandeh Yumkella of NGC congratulated Hon. Speaker of ECOWAS Parliament on his election. “We on the NGC wish you well and we will give you any support that you may need” he stated.

He also acknowledged the efforts of the Leader of the Opposition, Hon Chernor Maju Bah for his support during the campaigns that ushered in the newly elected Speaker.  “He was willing to put his weight behind the ECOWAS Speaker of Parliament” he said and added that “Hon Bah had served in that Parliament for 10 years and that was enough to contest but he put his ambition aside to support you for the sake of Sierra Leone”. He also thanked the APC as a whole for demonstrating political tolerance.

Hon. Lahai Marah of APC called on the newly elected Speaker to represent Sierra Leone in light of improving on political tolerance and nation building.

Leader of C4C, Hon. Saa Emerson Lamina whilst extending felicitations to the ECOWAS Speaker expressed hope for direct foreign investments and other opportunities.

The Opposition Whip, Hon. Hassan A. Sesay of APC noted that the current Speaker of Sierra Leone Parliament, Hon. Dr. Abass Bundu laid the foundation for the position that is now manned by a compatriot and therefore asked the newly elected Speaker to exercise the powers vested in him relative to the creation of more opportunities for Sierra Leone and other member states.  He said the APC believes in nation first and will continue to give their support; whilst encouraging Hon. Tunis to continue to seek advice from the Delegation of Sierra Leone to ECOWAS Parliament.

On behalf of the People of Pujehun, the home of the newly elected Speaker, Hon Dickson M. Rogers extended thanks and appreciation to President Bio, the APC Team in Parliament, the Speaker and all those who contributed to the election of the Speaker of ECOWAS Parliament.  Whilst commending many, Hon. Rogers described Hon. Chernor Maju Bah as ‘a true leader with all the attributes of a good leader’.

Hon Bashiru Silikie of SLPP paid tributes to the ECOWAS Speaker for his astute leadership relating to commitment, performance, and service delivery by addressing some of the challenges that are affecting the ECOWAS Parliament and the other Member States. “Please concentrate and perform, don’t disappoint Sierra Leone” he admonished and ended saying “we want Sierra Leone to benefit”.

Hon. Abdul Kargbo of APC expressed happiness over the election of the ECOWAS Speaker but advised him to work hard in order to overcome the challenges relative to consolidation of democracy and nation building in Sierra Leone, regional economy, law making, conflict resolution, and team work amongst others.

Hon. Ibrahim Tawa Conteh of SLPP said the newly elected Speaker was a calm and courageous leader but asked him to step down his position as Leader of Government Business in order to avoid over-concentration of duties and functions.

He allayed the fears expressed by some MPs that the Speakership of the ECOWAS Parliament is non-residential and that it would not in any way affect his duties as Leader of Government Business. “I have to stay here and work as Speaker of ECOWAS Parliament”, he categorically stated.

He also assured that he would work in the interest of Sierra Leone and represent the people well. “I will never ever betray the people of this country”, he stressed.

Further he told colleague MPs that as soon as he received the blessings of President Bio, he would start to work on modalities that will yield peaceful dividends and unity. “I will meet with leaders of all political parties, the civil societies and former President Koroma in the coming weeks”, he remarked.

He also assured that Sierra Leone will be on the forefront of democracy, fighting terrorists, improving on regional integration as well as mediation and several opportunities.

The aforesaid agreement which was laid on the table of the House on Thursday 20th February 2020 was piloted by the Minister of Foreign Affairs and International Cooperation, Mrs. Nabeela Tunis.