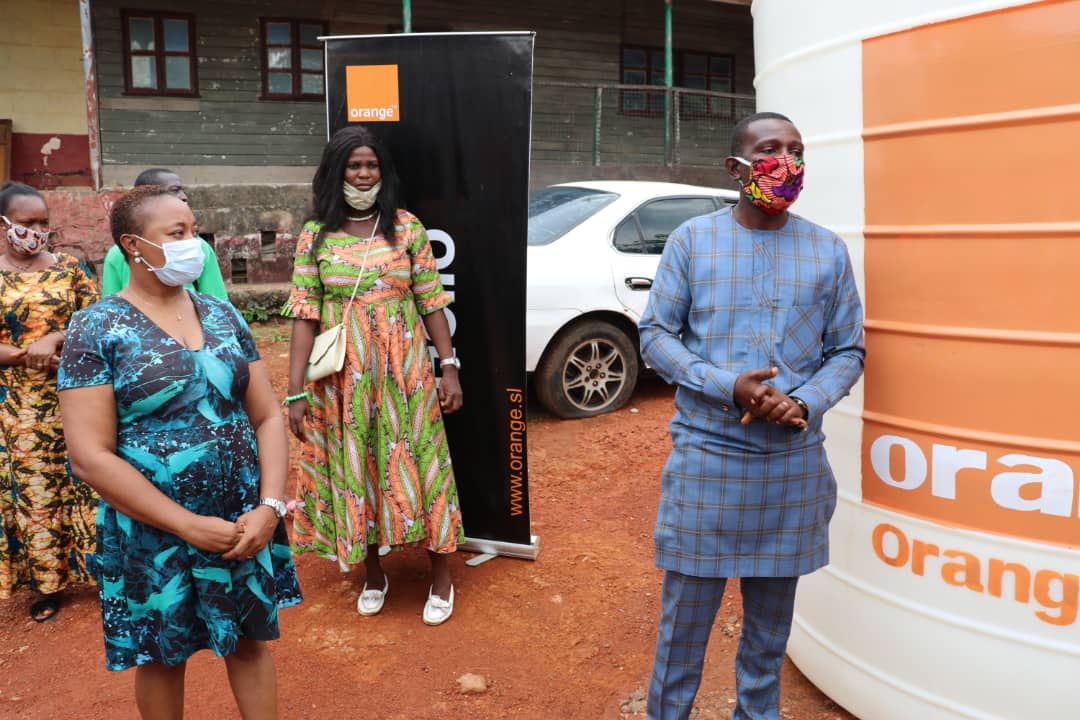 Orange Sierra Leone (SL), One of Sierra Leone’s leading telecoms company has donated the sum of Le1, 000, 000,000 (one billion Leones) to the government through the National Covid-19 Response Centre (NACOVERC).

The donation ceremony is part of a series of donations that Orange SL has made to the government to intensify the campaign against the Corona Virus Disease.

The said sum would not only be utilised for the national response centre in Freetown but also for the various response centres in all districts in Sierra Leone.

The National Civic Education Council will also enjoy a fair share of the donation as the institution is expected to play a key role in the dissemination of Covid-19 prevention measures through public campaigns.

In her address to the dignitaries at the conference hall of the Ministry of Information, Chief Executive Officer, Orange SL, Aminata Kane referred to the donation as a special one as it will benefit purely for those in the provinces.

“The donated funds are meant purely for the campaign against the Corona Virus in the provinces,” she said.

Madam Kane spoke about the close and direct partnership with government since the country recorded its index case.

Orange SL assured government that it would continue to support the campaign against Covid-19 until the virus is defeated.

She also assured government that everyone her company would make it possible for everybody to have access to the net so that they can reach Covid-19 preventive measures.

“We have been fighting with Corona Virus, and we will continue to fight until the virus is defeated,” she assured.

She however entreated government to continue to sensitise the people about the Covid-19 preventive measures.

An Official of NACOVERC, Solomon Caulker, appreciated the donation from Orange SL referring to it as the biggest intervention from the telecoms company.

Mr Caulker told the audience that he was extremely happy for the donation especially now that all districts in Sierra Leone stand to benefit.

“We are very happy that this time round, the company targets the districts in the campaign against Covid-19,” he said.

The NCOVERC official also explained that the intensified public education campaign as a result of the donation would effectively counter negative messaging that was prevalent in the provinces.

Mr Caulker expressed hope that the strong relationship between government and the telecoms company would continue.

In his appreciation speech, Minister of Information and Communication, Mohamed Rado Swarray thanked Orange SL for the great gesture.

He said the donation of such sum of money to the campaign against Covid-19 is a manifestation of the trust and confidence of the telecoms company repose in the leadership of the ‘New Direction’ government.

Mr Swarray told the audience the provinces must be paid attention to in the campaign against the virus.

“We have to pay attention to what is happening in the various districts in the country,” he said.

The Information Minister also spoke about Orange SL’s partnership with government at the time the virus struck.

The partnership between government and the telecoms company, the Minister said, was created at the outset of Covid-19 when government approached stakeholder communities for assistance.

He said Orange SL was among the stakeholder community that responded to government call.

“Orange SL has been there to help at the time government was groping in the dark,” he said.

However, the Minister called on the telecoms company not to shut their doors, but to   continue to be at the side of government until the virus is kicked out from Sierra Leone.

Handing over a cheque of the Le1Bn from the Orange SL CEO to the Minister formed part of the donation ceremony.

Three days back, Orange SL donated food items worth millions of Leones to 1000 quarantine facilities across the country through the Sierra Leone Chamber of Commerce.

Several donations have also been made by the telecoms company to a great number of communities including the host community.

The telecoms company cares for the people of Sierra Leone and it is determined to support government until Covid-19 is kicked out of the country.