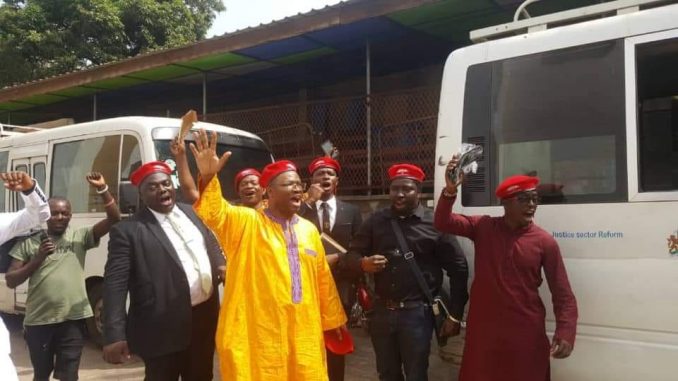 “It started small; it grew big and has grown bigger”. These were the words of an inside political analyst in the APC describing the obvious conflict on reforms.

The political definition of NRM is not outside the political dictionary of the APC. In a contextual sense, NRM is an Anchorage of a group of politicians within the APC seeking internal reforms in a very sustained and productively aggressive manner. In some sense, NRM represents the voice of the young generation sufficiently poised and motivated to drive reforms in the APC.

The APC as a party in totality is not in conflict with NRM but rather a segment of the APC that combines characters of the old generation and the current leadership cadre of the party. Put in a clearer context, it is a conflict between the old and young generations, forces of continuity and change, chronic status symbols and desperate elements of a new era, assumed political ownership and aggressive denial to wrongful claim of political ownership of the APC. In essence, it is a liberation struggle, a reawakening to contemporary political challenges and the dymystication of political absurdities and chronic egoistic political tendencies. In a nutshell, this is all about NRM and APC.

What is happening in the APC is not only scary and undesirable but has the lethal potential to disrobe the party of its popular appeal, political attraction and “sweetness”. All these are on account of the repulsive and arrogant tendencies of egoism. The NRM sprung up and put their case in a professional manner but with the fervour and diction of change management. This was an opportunity to redress the chronic political shortcomings of a party whose constitution can be best described anachronistic!

The heat was on and the determination strong. The leadership of the APC attempted at opening up, felt a sense of loss of authority and recoiled. The stage was set and daggers drawn.

The only “crime” committed by NRM is consituting themselves into a formal structure with an expressed position anchoring on a clear set of objectives.

The clamour for reforms in the APC has been on for a very long time but in a suppressed and simmering mode. This has been largely due to the obvious and fierce resistance to reforms by the current leadership of the APC. Clearly and most regrettably, this was a bad show of leadership and faith.

One only needs to be of clear conscience to know that APC is in bondage, held hostage by its current leaders. All genuine efforts at reforms are supplanted and frustrated by the current leadership of APC.

Today, any call to reforms will attract unpardonable wrath. The historic political figure in APC, Comrade Victor Foe, suffered brutal rejection and incalculable insults for simply agreeing to the political reality of the day. Alpha Khan, an architect of the 2007 APC victory, was named ugly names and paraded like a common criminal for acquisecing to the call to change and the current political dynamics. Paul Kamara was humiliated and demoralized in Port Loko for being perceived as sympathizer of NRM. Mohamed Bangura suffered similar fate. How can we run the political show like this?

The NRM is suffering from reckless political propaganda orchestrated by the current leadership of the party. The rank and file of the party are deluded and indoctrinated into believing that NRM is evil and set out to destroy the APC. This is not only wrong but outrageously wicked! The NRM has committed a productive political “crime” in the APC: calling and pushing for much needed urgent and compelling reforms. If the APC fails to reform, the consequences will be dire and catastrophic.

The NRM call for reforms has graduated into a revolution due largely to the reckless manner in which APC handled the situation. APC resorting to the 1995 Constitution is equivalent to resorting to the politics of antiquity.

The signs are worrying! APC social media platforms are effective empires of character assassination, leadership discredit, unimaginable insults and brutal political denial but a corporate and sponsored disconnect from state governance. These are largely engineered by educated elites, educated elites who should be the moral guardpost of society.

The APC must be courageous to humbly plead with Kothor EBK to step aside. The historic Dr. Yansanneh must be encouraged to pack his bags and roll out of the political history of APC. Yes, APC needs liberation and urgent reforms. APC needs separation with insulting political proprietorship of a small clan of leaders. The ordinary members of APC must reclaim their political shares of the party.

Today, NRM is castigated but in the fullness of time they will be the marked political heroes of APC in the twenty first century.

Politics of Animosity and Violence!!!