North Korea ‘willing to restart’ nuclear talks with US 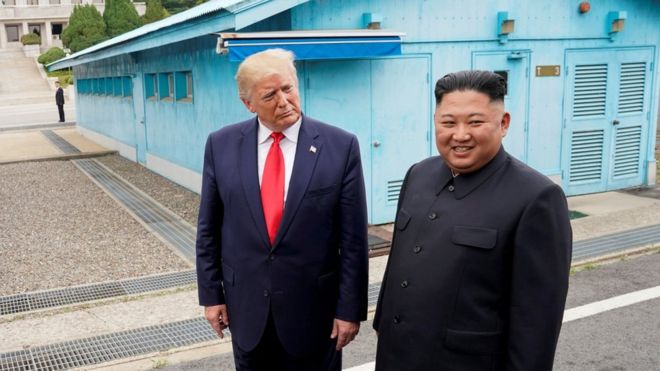 North Korea is willing to restart denuclearisation talks with the United States later this month, the country’s vice foreign minister has said.

Choe Son-hui said they were willing to resume “comprehensive” discussions in a setting agreed by both sides.

Her statement came after US Secretary of State Mike Pompeo voiced hopes for talks to resume.

It’s the latest in a series of tests in recent months.

At their first meeting, last year, US President Donald Trump and North Korea’s Kim Jong-Un agreed to the “complete denuclearisation” of the Korean peninsula – but without determining what that meant or how to achieve it.

Discussions on the finer details broke down in February, during their second summit in Hanoi.

What has North Korea said?

Ms Choe said on Monday that North Korea was willing to sit “face-to-face” again at an agreed time and place around late September.

In the statement, she urged Washington to come with a fresh approach in order to keep hopes for a deal alive.

“I want to believe that the US side would come out with an alternative based on a calculation method that serves both sides’ interests and is acceptable to us,” she said, according to Reuters.

The last summit broke down after a rift emerged over the lifting of sanctions.

In June, Mr Trump and Mr Kim spoke again at a historic meeting at the Demilitarized Zone (DMZ) between the two Koreas.

During a brief discussion the two leaders agreed working-level talks should resume, but they still have not.

“I have a very good relationship with Chairman Kim,” Mr Trump told reporters at the White House on Monday. “I always say having meetings is a good thing. We’ll see what happens.”

What about the new tests?

South Korean military officials say two projectiles were fired toward the sea at about 07:00 local time on Tuesday (22:00 GMT Monday).

They were launched towards the east from Kaechon in South Pyongan province and travelled about 330km (205 miles). A national security council meeting was held in response.

A senior US official told the AFP news agency they were aware of the latest reports.

“We are continuing to monitor the situation and consulting closely with our allies in the region,” they said.

Speaking to US media on Sunday, Secretary of State Mike Pompeo said the administration was “disappointed” at the ongoing tests.

“We wish that he would stop that. But our mission set at the State Department is very clear: to get back to the table,” he said.

Sierra Juice – The Taste of Salone