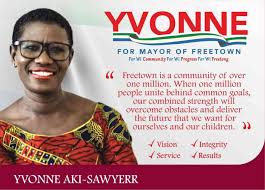 Recently appointed Ambassador of the Republic of Ireland to Sierra Leone, Lesley Ní Bhriaian, paid a courtesy call to Mayor Aki-Sawyerr at the Mayor’s Parlour in Freetown.

Irish Aid has funded FCC interventions in six communities that contribute to mitigating disasters and building resilience in Freetown. The interventions, implemented by UNOPS, and carried out with community participation earlier this year, included:

Freetown City is grateful for the support we have received from Irish Aid and we look forward to working with the new ambassador.

CHRDI Champions the cause of Sacked Stats Employees

NASSIT AN INSTRUMENT OF SOCIAL AND ECONOMIC JUSTICE