In November of 2020, the Sierra Leone Roads Authority awarded a contract of Le38, 806,312,001.92 (thirty eight billion, eight hundred and six million three hundred and twelve thousand one Leone and ninety two cents) to five of their licensed Contractors. The Project which is to end in April 2021 calls for ‘brushing and clearing, ditching, backfilling, compacting and re-gravelling’ of a 219km road length network leading from Moyamba to Mokagbanda, Mokagbanda to Shenge; Moyamba to Yargoi; Rutifunk to Moyamba and from Mosenesie Junction to Nitti.

Moyamba District Chairman Joseph Mbogba complained that most times these projects fail because council is not involved.  The contractors he said don’t listen to advice from Council even when the project is under them.

Professional Head Ministry of Works Paul S H Bockarie admitted that Sierra Leone has challenges with roads. “So what is due to be done now must be done”.

Deputy Director General SLRA Abdulai Ansumana told the people that “We want you to get good roads so that you can live a good life”.

Member of Parliament Constituency 096 Simeon Fefegula complained that equipment used by most of the contractors were old. He stated: “But we are here to see that the right thing happens as most of the equipment that these contractors use are carcass and this is causing the work not to go on”.

The Company De Fitha and Koi Kpaka Enterprises that was awarded Rotifunk-Moyamba Road has completed only about 6.8Km of the 30km road length that was given them.

Of the 85km Moyamba-Kangahun-Mokaba-Yargoi Road Length that was awarded Kam Construction, 65km has been half-done. Fatu K was awarded the Mosenesie Junction-Gbangbatoke-Nitti and the company has brushed and graveled almost the entire 20km Road length that was awarded them. Fatmata Kemokai Fatu K CEO bragged to the team that “I have made road in a place where there used to be no road, where vehicles were not plying before”.

During the inspection, the SLRA team gave advice and recommendations based on what the team observed. Among recommendations given were that, some of the roads need more ‘brushing, expansion to 16m, compacting, backfilling, building of culverts and a 4 meter drainage system’ to allow easy flow of water during the rains.

“We are asking for a 4month extension and we shall finish within this time”, Josephus Santigie of P7 Company Limited, requested from the team. Project Manager and SLRA Engineer however asked him to look for ‘efficient’ bulldozer that can do the job. 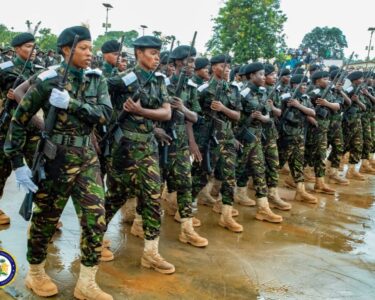 RSF-SL TALKS ON DISABILITY AND EDUCATION