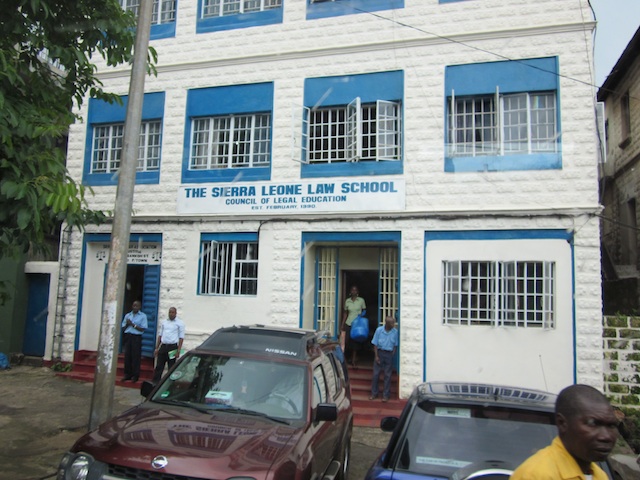 While government is struggling to fulfill a campaign promise to provide free and quality education to Sierra Leoneans, it seems as if the education may be free but lacks quality assurance. Despite reforms instituted at all levels of academia, from primary to tertiary, the one big challenge government is grappling with is examinations malpractice. From WAEC to the University of Sierra Leone and then to the only Law School we have, the issue of irregularities in exams remains a common feature. Several attempts have been made by past governments to address this malaise but to no avail, as the saying goes when you fight corruption, corruption will fight back.

In all of these institutions, there are people benefitting from the criminal syndicate, and these people are mostly the leadership. For the Sierra Leone Law School the administration and the Council of Legal Education, the governing body of the school, have earned the reputation of being untouchable despite the huge disenchantment that accompanies their publication of results every year since the 1990s. No politician or leader dares probe the workings of the school. It is considered mainly the domain of the Chief Justice and for that reason it is beyond reproach despite its being a public school established by parliament. To further ensure its independence from the oversight supervision of the Ministry of Education, the authorities deliberately refuse to take subvention from government and prefer running the school on their own terms.

At first blush this may seem good for government, as it lightens its economic burden but there is a more serious problem it brings—unchecked activities. As it is the Law School is the only educational institution that is not under the supervision of the Ministry of Education. The school runs a government of its own has been abusing that role in the massive failure of young Sierra Leoneans every year and the imposition of exorbitant fees. Past Attorney Generals and Chief Justices have been part of that scheme but it seems the current duo in the said positions is proving to be a different kettle of fish. The current Chief Justice knowing that most of the policies adopted by the school are neither supported by statute nor products of thorough deliberations by Council started stamping his authority to ensure that students are not unfairly treated by policies that have no backing of law. In one instance, through a publication, he allowed students who were said to have exhausted their chances to take the 2019 re-sit exams. This came after the school declared 91 students failed for the 2019 June session. The Chief Justice’s letter attracted a bitter response from a member of the Council, in a manner that many view as disrespectful to the authority of the Chief Justice.

Meanwhile, the Criminal Investigations Department has launched a criminal probe into various activities of the school ranging from the conduct of examinations to decisions of council. This was after a senior ranking police officer who was also a victim lodged a complaint with the CID and called for investigations of the school. The police probe is intended to span from 2014 to date.  So far they have obtained statements from senior officials of the school including the Registrar and the Chief Exams officer and requested documents including exams scripts. They also made arrests.

In a bid to show government’s commitment to fix the problem of legal education once and for all the Speaker of Parliament also launched an investigation of the school through the Parliamentary Committee on Higher and Tertiary Education. In fact the parliamentary probe started last year and is gathering pace this year, with an invitation extended to the Registrar and former Director of the School. Both officials attended the multi-partisan committee hearing on Wednesday 30th October, 2019. However the former Director revealed her ill-preparedness for questions relating to her administration of the school. The Chairman of the Committee, Hon. A.O Kamara therefore handed both the Registrar and the former Director a questionnaire for them to answer and return in two weeks.

In the midst of all these efforts by government institutions, some of the school authorities are also pulling strings to sabotage the investigations of the police. Those who are connected with some people in the political class are forming delegations to them and get them to make calls to exert powers from above. Some Council members who are connected with highly placed police officers are also using them to kill the investigations that have already started. This is not the first time the school is being investigated. The last time it happened was five years back when massive fraud was unveiled to a point that certified lawyers were recalled, the Registrar was indicted by the Anti-Corruption Commission and the Chief Justice was sent on leave to retirement. But it seems the authorities did not learn from that experience.

Despite the failings of the current government, one cannot ignore their resolve to sanitize the educational sector. The Attorney General, the Chief Justice, the Speaker of Parliament and the Minister of Higher Education have all taken a stern posture to look into cases of irregularities and institute sustainable reforms in all cadre of academia, from WAEC to the Law School.  The public is waiting to know the outcome of the various investigations and further steps to be taken by government.