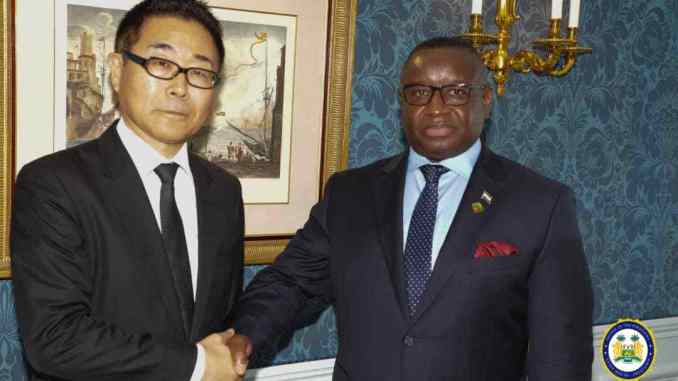 “Mr President, we support the policies of your New Direction Government, which include empowerment of young people, the fight against corruption and investment in human capital development,” MrKoshikawa said.

He said that JICA has new projects that will support Japanese small and medium enterprises to invest in Sierra Leone, leading to the creation of employment and promotion of private sector growth.

On the opportunities for more cooperation, MrKoshikawa spoke about a huge market in Japan for fish from Sierra Leone, adding that the two countries will explore cooperation in both the agriculture and energy sectors.

President Bio thanked the government of Japan, through JICA, for supporting Sierra Leone. He said he was particularly pleased that JICA has recently upgraded its offices in Sierra Leone from a field office to a country office.

President Bio said that this move would expand the portfolio of Japanese projects in the country. He also commended JICA for their commitment to upgrading one of the government hospitals in Sierra Leone.

“As a new government, we want to now look at trade and investment cooperation with JICA. We are particularly keen on investment in the energy sector; and we have also made a lot of reforms in the business environment,” President Bio said.

The president also spoke about the need for more technical cooperation, including scholarships for young people, the opportunity for Japanese companies to set up aftercare services for Japanese vehicles in Sierra Leone, and value-addition to both the agriculture and fishery sectors.

But the JICA officials were not specific about the size of investment portfolio they are willing to commit to Sierra Leone.

President Bio has promised to create thousands of jobs for young people in the country, and the clock is ticking.

Recent political violence and growing lawlessness in the country do not auger well for the president and his mission to attract foreign investments.

If ‘New Direction’ means new ways of governing Sierra Leone, then all eyes are now, ever than before on State House, waiting to witness the change from lawlessness to law and order, and political stability. The time for change is now.

President Bio is a retired soldier who was elected to office by a vast number of people, who believed he has what it takes to bring discipline and law and order to Sierra Leone. Is he losing control of the country?

Mr President, over sixteen months ago, you promised to steady a sinking ship you described as “rudderless” under former president Koroma. Today, the sinking ship is fast heading towards an iceberg with 7.5 million people on board. The time to act is now.