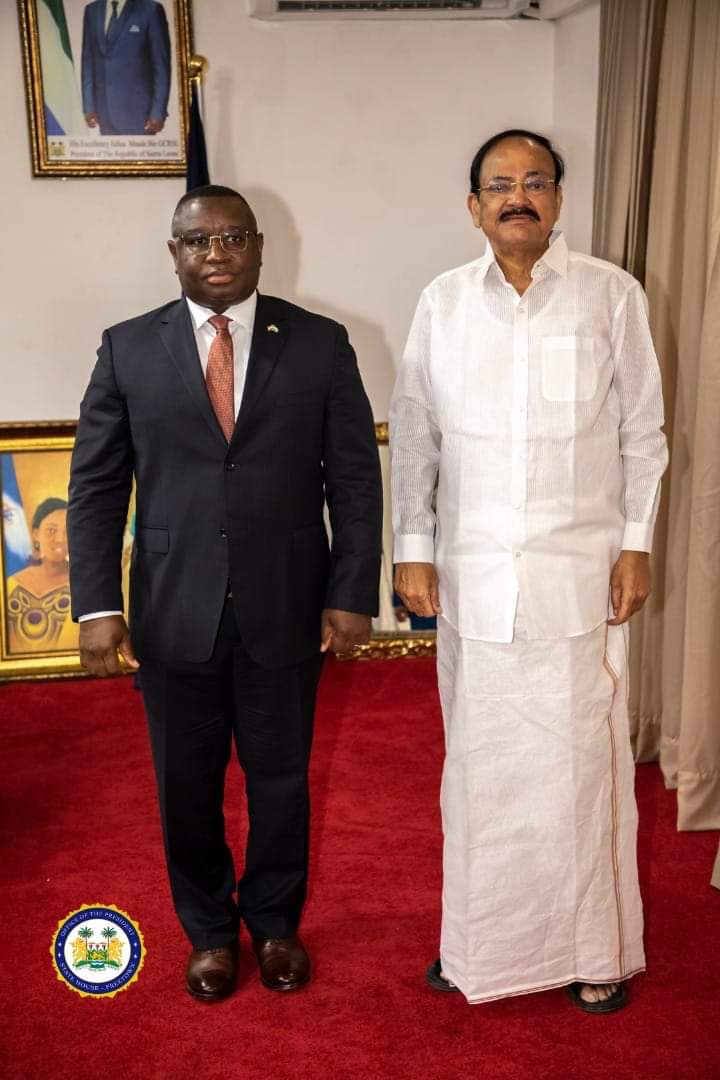 Praising president Bio and his government for the ongoing economic reforms, the Indian vice president said that the agreement with Export–Import Bank of India would encourage public-private partnerships, and development of Sierra Leone’s private sector.

Speaking at a joint press conference, Sierra Leone’s vice president- Dr Mohamed Juldeh Jalloh and his Indian counterpart said that both the Indian and government of Sierra Leone have signed other cooperation agreements, including the establishment of a joint commission, cultural exchange and capacity building programmes aimed at promoting president Bio’s flagship human capital development agenda.

The Indian vice president is visiting Sierra Leone along with his country’s Minister of State for Animal Husbandry, Dairy and Fisheries – Shri Sanjeev Kumar Balyan; a Member of Parliament in the upper House of the bicameral Parliament of India – Shri Ramvichar Netam; and senior officers of the Government of India.

President Bio paid tribute to the long-standing relationship between the two countries, mentioning the role the Indians played as peacekeepers with the United Nations in post-war Sierra Leone.

He said that the Indian community in Sierra Leone has contributed greatly to Sierra Leone’s economic development.

“Sierra Leone and India have had a long-standing relationship. Today, as a country, we want to assure the people of India that we will continue to strengthen that relationship for our mutual benefit. Enjoy your stay and thanks for visiting Sierra Leone,” president Bio said.

Speaking about the importance of the meeting, vice president Naidu, who concludes his three-day visit to Sierra Leone tomorrow Monday, 14 October, said the visit is the first ever high-level visit the West African nation has had from the Republic of India.