HRCSL ENGAGES SCHOOLS ON INTERNATIONAL DAY OF THE GIRL CHILD 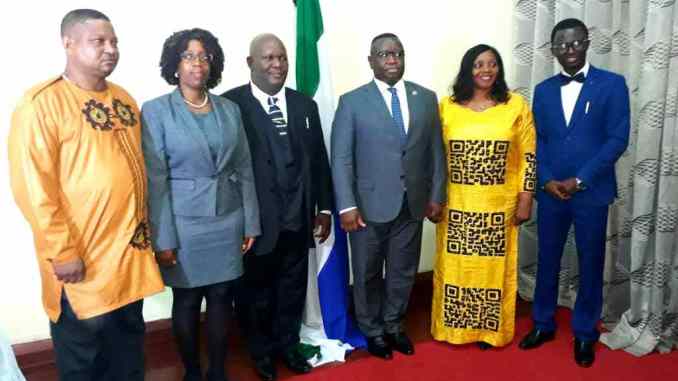 The Human Rights Commission of Sierra Leone (HRCSL) today Friday October 11th, 2019 commemorated the International Day of the Girl Child by undertaking a nationwide public education in schools with the message on the child rights act, the amended sexual offences act, child marriage and the work of the HRCSL.

In the Sierra Leone context, while we have seen an improvement in the enrollment of girls in schools and tertiary educational institutions, there still remain huge challenges facing them in the country. Teenage pregnancy, and sexual and gender based violence in Sierra Leone remain a serious challenge in promoting girls rights.

The theme for this year is Girl Force: Unscripted and Unstoppable which aims to highlight and address the needs and challenges faced by girls while promoting girls’ empowerment and the fulfillment of their human rights.

“This affects their educational and social development, thereby limiting their empowerment to engage actively in what will enhance their positive contribution to society and their future wellbeing”. The Chairperson of HRCSL, Mrs. Patricia Narsu Ndanema says.

The Chairperson also said It’s was important to note that educating girls on the laws that protect women and girls and their corresponding rights and responsibilities is a vital part of building a peaceful community.

Moreover, she continued that human rights education is a critical means of instilling the knowledge, skills, attitudes and values that will enhance a greater culture of human rights.

“Therefore, the HRCSL is embarking on public education particularly in girls’ schools as that will serve as platforms to identify, discuss and documents some of the human rights challenges faced by girls in their schools and community”. The Chairperson stated.

The Deputy Director of Programmes, Planning and Evaluation, Richard Tamba M’bayo and his team engaged the Richard Allen and Government Municipal Secondary Schools.

The International Day of the Girl Child was adopted by the United Nations General Assembly Resolution 66/170 on 19th December 2011. This initiative aimed at increasing awareness of inequality faced by girls based on their gender in society. In the midst of this, every year across the world, the International Day of the Girl Child is celebrated on October 11 to recognize the rights of girls in order to break the cycle of discrimination and violence against them.

I WON’T BE DISTRACTED… Minister of Tourism