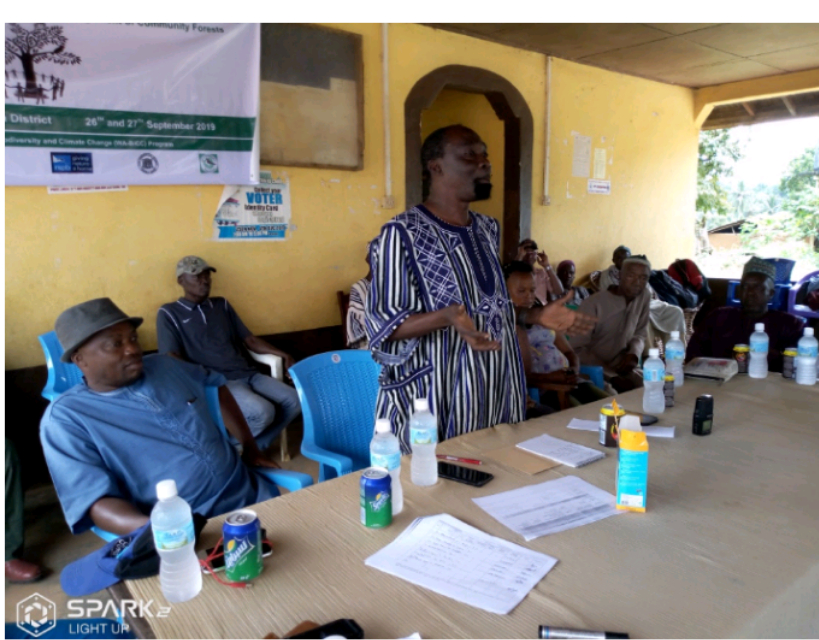 By Kamal M Barrie in Kenema

Addressing colleagues and other key stakeholders, the chairman of the occasion who is the chief of Koya Chiefdom PC Alameen Kanneh said they as community leaders within the national park have decided to propagate the motive of conservation as deforestation impacts negatively in their communities.

PC Kanneh informed the gathering that the conference of Paramount Chiefs is a way for traditional leaders to engage their people and to disseminate messages relating to conservation and its benefits to mankind, adding that Baoma Koya is the third chapter of the conference after Makpele and Gaura chiefdoms respectively.

He warned that deforestation is a disaster that does not select who to target and therefore it’s of great importance to serve as watch dogs to protect the forest for the future generation.

PC Kanneh maintained that human activities have over the years endangered the lives of useful animals like monkeys, chimpanzees, Baboons and even birds.

He encouraged the gathering to be conservation lovers as it is only with love for nature that they can endeavor to protect the national park and its entire species.

Paramount Chief of Gaura chiefdom, PC Moses Sama Bunduka revealed that it is dangerous to cut trees which will expose villages and can give easy access to the wind and other natural disasters to destroy the infrastructure of communities.

Paramount Chiefs of Gola Rainforest has plans to visits all the chiefdom head quarter towns as a way of campaigning against deforestation and to preach to villagers how important it is to safeguard our national park.

In his contribution, Paramount Chief of Makpele chiefdom, intimated that climate change is already here and should was discussed at the 74th UNGA in New York where World Leaders were recently gathered.

Paramount Chief told the gathering that they as Traditional Leaders they have have agreed to protect the national park and to teach the young generation to see reasons why they should follow their footsteps.

Paramount Chief of Nomo chiefdom also reiterated the need to preserve the Gola Park which will help generation yet unborn, noting that the people of Nomo Chiefdom are actively engaged in IVS farming and therefore the forests are safe and all the species therein.

The Youth Leader of Koya chiefdom Alhaji Kelfala thanked the chiefs and all stakeholders present for the laudable venture but also cautioned the chiefs to lead by example as they as youths are ready and willing to protect the national park from invaders but the problem they usually babble with is the order from above.

Leader of the women of Koya chiefdom, Madam Hawa Morhai thanked the chiefs for the precedent they are setting for the youths to follow she pledged that they as women are ready and willing to give their support as long as it is to protect the national park which she said is benefiting them with uninterrupted supply of water and fresh air which has helped reduced some dangerous diseases that has been affecting them in the community.

Other dignitaries present were representatives of the Tunkia and Malema paramount chiefs who could not make it due to poor health, the Kenema district forest officer, councilors and district council representatives, chiefdom stakeholders and Gola Rainforest staff among others.

The identification of forests outside the national park for the formation of community forestry in Koya Chiefdom climax the occasion.