East End Tigers, one of the Premier League Clubs in the country have rubbishes a social media audio linking their Chairman to what the club describes as made up audio at tainting the character of Chairman Victor Lewis. Below is the press release by the club.

The Management of East End Tigers Football Club would like to express its dissatisfaction over a shared ‘made up audio’ purporting Chairman Lewis’ voice. The purported audio is designed by certain unscrupulous individuals whose primary aim is akin to tarnishing the hard-earned reputation of our Chairman.

Management would like to state emphatically that Chairman Lewis has no influence whatsoever, whether actual or imagine on activities related to the electoral process of the Sierra Leone Football Association. Our Chairman’s only interest as a peace and law-abiding citizen is to see the growth and development of the game at all levels.

“The audio on social media is fake and that’s not from me. I will never say such a thing because I am not like that. Why do people want to tarnish my unblemished reputation to serve their interests? This is really unfortunate and sad for the game we love so much”, Victor Lewis said.

In this modern age where technology can manipulate forms and voids, anyone could sit at the comfort of their expertise and achieve the hideous of effects at the detriment of decent people for cheap reasons.

In light of the above, Tigers’ Management hereby warn those sharing the said audio to stop forthwith as we have already contacted the Cyber Unit of the Sierra Leone Police for appropriate action.

Mr. Lewis continues to recuperate from his stab wounds; an act occasioned by Augustine Kambo of Central Parade.

CEO Paul Massaquoi is a Ministerial Asset for President Bio!!! 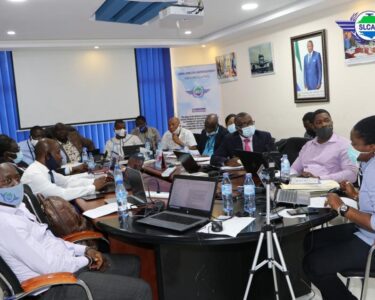