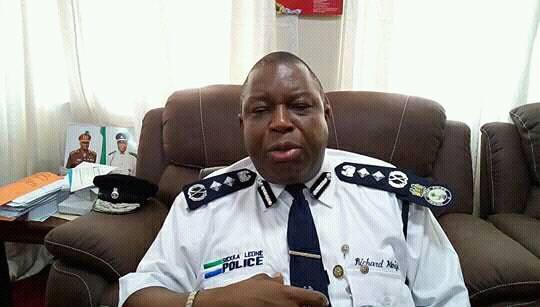 It was a state of pandemonium. Students were running helter-skelter in fear of their lives as armed police officers pursued them like common criminals. Panic engulfed the entire area giving an inclination that all hell had broken loose.

What started as a peaceful protest suddenly became rambunctious. Both male and female students were seen manhandled by armed personnel. Those who barely escaped were chased after from Pademba Road right through to Circular Road/Mends Street axis. Even students invited by the Africa Young Voices Television (AYV TV) to be interviewed were arrested right inside the compound the media empire.

The fact of the matter is that students of Limkokwing University had assembled in a peaceful and orderly manner at the Cotton Tree roundabout to express their dissatisfaction with the Bio-led government for refusing to honour the scholarship granted them under the previous Koroma-led administration.

Over forty students and the leading right activist for the students protest Thomas Moore Conteh were arrested and placed behind bars. The police claimed that they have breached the law.

Journalists too were not spared. Five journalists reporting for Radio Democracy 98.1, Concord Times Newspaper and other media houses were all arrested while covering the news. They were later released in the evening. The students were released afterwards but Thomas Moore Conteh remain in custody.

“The arrested students and journalists have been released. But Thomas Moore Conteh is still in custody.” Deputy police spokesman, S.S. Conteh confirms. This confirmation was made at the time of going to press.

Alphonsus Gbanie, Executive Secretary of Human Rights Defenders Network is the first activist who has come out to boldly condemn the actions of the police. He stated in no uncertain terms that “the highhandedness of the police is an affirmation that what they are doing is regime policing rather than democratic policing.”

But this is not the first time the police have brutalized university students. In March 2017 for instance, police officers opened fire at Njala University students, killing one and injuring several others.

Following that ugly incident, Amnesty International West Africa researcher vocalized that “…the bloodshed and loss of young life is a tragedy and suggests a heavy-handed response by the security forces to a student protest.”

Comparatively speaking, yesterday’s incident has again brought into sharp focus the conflict that exists between the right to peaceful protest from a human rights perspective, and the law from a legal standpoint.

In view thereof, section 17 of the Public Order Act of 1965 would come into play. While human rights defenders would always argue that section 17 (1) of the Act gives them the right to hold a peaceful protest, the police would rather bank on subsection 2 of the Act to negate the exercise of that right. Be that as it may, the right to peaceful protest is universally recognized as a fundamental right of citizens that should be guaranteed at all times.

Section 17 (1) states that “any person who intends to take part or takes part in organising or holding any procession shall first notify the Commissioner of Police in writing of his intention to do so and any person who fails to give such notification as aforesaid shall be guilty of an offence.”

The succeeding subsection 2 reads: “The Commissioner of Police shall by order in writing addressed to such persons giving notice, disallow the holding of any procession or impose such conditions as he shall think fit on any procession where in his opinion the interests of defence, public order, public safety or public morality so require.”

All this is happening at a time the World Internal Security and Police Index (WISPI) ranks the Sierra Leone Police as the 10th worst police force in the world, positioning them at 117 out of 127 in the global ranking.

Preceding reports have also not put the country in a good spot. The Global Peace Index, World Press Freedom reports marked deteriorating standards for Sierra Leone in terms of our level of peacefulness and press freedom.

The question many people are now asking is why the police failed to arrest individuals who were seen destroying ballot papers and other voting materials during the rerun of Constituency 110 Parliamentary bye-election but could hurriedly manhandle and arrest students engaged in a peaceful protest?