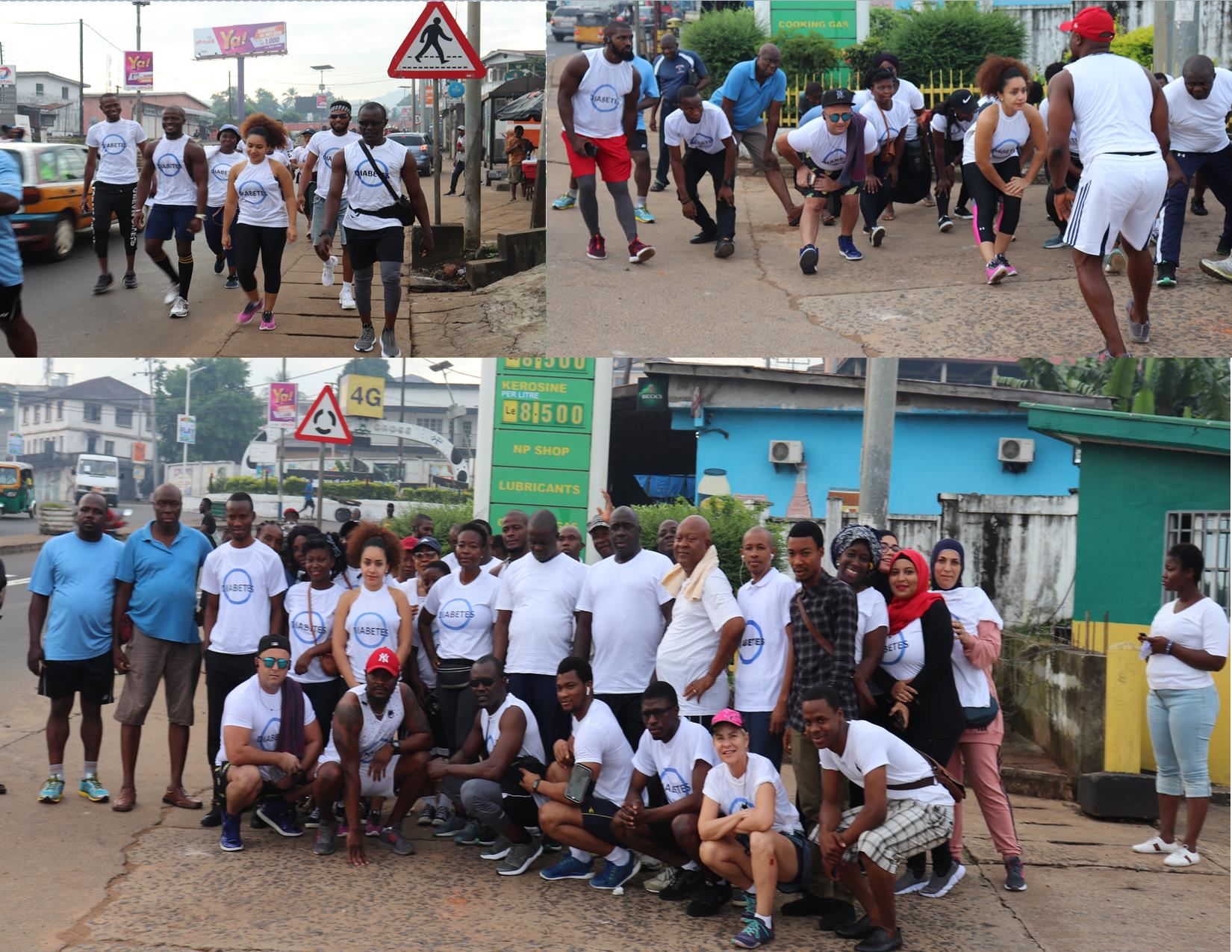 Citiglobe and the National Eye Care Program have raised awareness through exercise to commemorate this year’s World Diabetes Day.

The exercise took place over the weekend started from Congo Cross and ended at the Gulf Club in Freetown. World Diabetes Day is commemorated on the 14th November every year.

She disclosed that Citiglobe has been raising awareness of diabetes since 2013 and every year they commemorate World Diabetes Day.

According to the World Health Organization (WHO), Africa will have the greatest hit of non-communicable diseases like diabetes. This finding Madam Ghazzawi explained can due to the adoption of westernized culture as one of the main factor.

Madam Ghazzawi explained further that increases in urbanization and westernization are some of the factors leading to the increase in diabetes in Africa as they have access to transportation, exposed to unhealthy diet, sedentary lifestyle and lack of knowledge about nutrition and what they should eat among others.

She said one can also get diabetes if that person has a family history of diabetes but if he or she does regular exercise and eats healthy, it will take longer period for the disease to show up.

“There are some without family history but because of obesity which is one of the main causes of diabetes will end up to cause insulin resistance because of fat.”

She defined obesity as a disorder involving excessive body fat that increase the risk of health problems and it is often results from taking in more calories than are burned by exercise and normal daily activities.

Diabetes, a non-communicable disease, chronic condition characterized by increase blood sugar level. It is a condition that impairs the body’s ability to process blood glucose, otherwise known as blood sugar.

There are several types of diabetes, the three major diabetes types can develop: Type 1, type 2, and gestational diabetes.

Type I diabetes: Also known as juvenile diabetes. This type occurs when the body fails to produce insulin. People with type I diabetes are insulin-dependent, which means they must take artificial insulin daily to stay alive.

Type 2 diabetes: Type 2 diabetes affects the way the body uses insulin. While the body still makes insulin, unlike in type I, the cells in the body do not respond to it as effectively as they once did. This is the most common type of diabetes, according to the National Institute of Diabetes and Digestive and Kidney Diseases, and it has strong links with obesity.

Gestational diabetes: This type occurs in women during pregnancy when the body can become less sensitive to insulin. Gestational diabetes does not occur in all women and usually resolves after giving birth. Less common types of diabetes include monogenic diabetes and cystic fibrosis-related diabetes.”

Diabetes is a serious, chronic condition. According to the American Diabetes Association (ADA), the condition is the seventh leading cause of death in the U.S. While diabetes itself is manageable, its complications can severely impact on daily living, and some can be fatal if not treated immediately.

The Consultant Clinical Pharmacist said based on her research, people are at risk of developing type 2 diabetes and obesity is more common in females.

“For those with types 1 diabetes, taking insulin is the only way of moderating and controlling the effects of the condition.”

Madam Manal Ghazzawi pointed out that some of the signs and symptom are overlooked.

She said it is important for the public to know about diabetes as it is a global health situation. She advised for regular weekly exercise, reduction in oily and starchy food.

She said there are several problems diabetes can cause to the eyes which one can’t be aware of until they check their eyes.

He encouraged those that were not present for the walk to know that there are things that regulate the existence of diabetes such as regular exercise. He categorized the exercise in three forms which are flexibility that covered range of motion and muscles, strength exercise that strengthen bones and prevent one from bone problem and fractures and cardio that improve one’s heart, these, he said if done regularly will help preventing the sickness.

The walk was climaxed with free screening, eye examination and educative messages about diabetes.