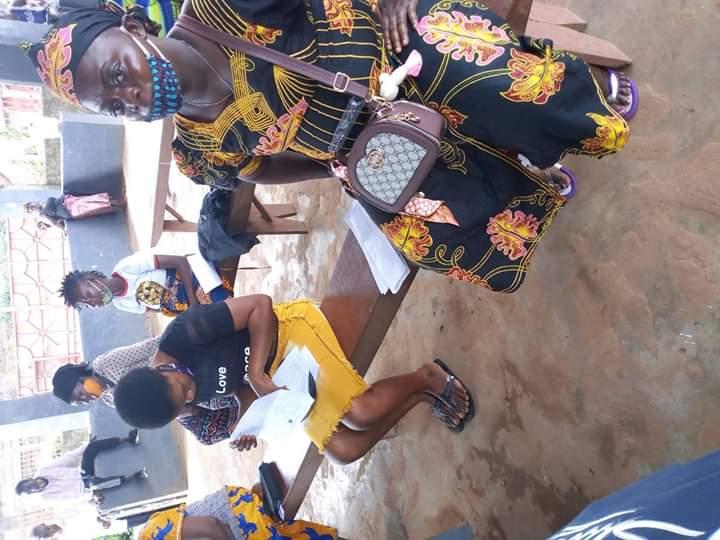 Wonders can never end as dozens of erstwhile supporters of MALOA Women conamed HOPANDA PEACE SUPPORT GROUP benefits from Micro Finance provided by Socfin Agricultural Company. Receiving the money at a well-attended ceremony held at Sahn Malen Administrative Court Barry on Wednesday July 22nd 2020 ,all sixteen beneficiaries  profusely showered blessings on Socfin and local Chiefs promising  not to be fooled any longer by the reminants of MALOA whom they referred to as detractors and further urged all and sundry to see reason to toe the line noting that with unity Socfin can continue to bring unforeseeable developments into Malen Chiefdom and the rest of the Sierra Leone as abundantly demonstrated . Speaking on behalf of the team Madam Massa Boakarie of Taninahun Malen pledged their unflinching support and loyalty to Hon. PCBVS Kebbie and the Management of Socfin and reassured all that the loan will be utilized for the intended purposes of the membership of the group. Buttressing the point speaker after speaker including Ibrahim Sheriff told the crowd that their plan to take leave of MALOA is as a result of informed decision voluntarily reached by collective of HOPANDA and that they were moved by the developments made by Socfin and also called on management to continue to provide for the people of Malen Chiefdom. Similar statements were made by Madam Alaymatu Magbie of Gboyama and Adama Ganda who openly blamed MALOA for being misled and henceforth promised to hold follow up meeting with the view of educating more youths especially women on the dangers of staying in MALOA . Speaking in a follow up interview former Chairman of MALOA , School teacher ,Karmoh Brima Lappia described the decision of the women as a loudable gesture and warned all not to repeat the mistake of returning  to MALOA which he termed as a sinking ship . Particularly the former MALOA chairman