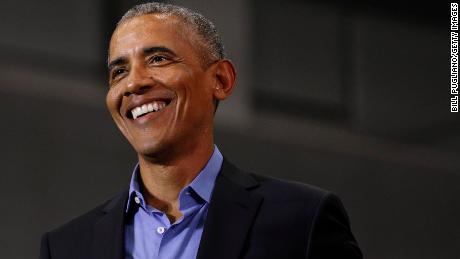 He made the comments at the Obama Foundation’s annual summit in Chicago on Tuesday.

Mr Obama said that calling people out on social media did not bring about change, and that change was complex.

“Woke” is described as being alert to racial or social discrimination and injustice, along with being aware of what’s going on in the community.

Mr Obama told the audience: “I get a sense among certain young people on social media that the way of making change is to be as judgemental as possible about other people.

“If I tweet or hashtag about how you didn’t do something right or used the wrong verb, then I can sit back and feel pretty good about myself because ‘Man did you see how woke I was? I called you out!'”

“That’s enough,” he said. “If all you’re doing is casting stones, you are probably not going to get that far.”

Mr Obama added that “people who do really good stuff have flaws”.

His comments come as Democrats prepare for the 2020 presidential nomination race. So far, there has been a focus on how “woke” candidates are, with a number apologising for past incidents.

Before withdrawing from the race, Senator Kirsten Gillibrand went on television to apologise for using the term “illegal alien” in the past. Elizabeth Warren has apologised for identifying as Native American, while Pete Buttigieg has apologised for his use of the phrase “all lives matter”.

Last April, he told a crowd at an Obama Foundation event in Berlin: “One of the things I do worry about among progressives in the United States, maybe it’s true here as well, is a certain kind of rigidity where we say ‘Uh, I’m sorry, this is how it’s going to be’ and then we start sometimes creating what’s called a ‘circular firing squad’, where you start shooting at your allies because one of them has strayed from purity on the issues.”

Jen Psaki, former Obama White House communications director, told CNN that she believed Mr Obama’s most recent comments were a message for the Democratic Party and those running for election.

“If we are launching purity tests, we are going to have such a small party and will not be able to win. Governing is not about saying: ‘You don’t agree with me, then you can’t be part of the conversation.'”