Allow Girls to be Girls and not ‘Pekitos” Rev. Prof. Edwin J.J. Momoh

Speaking on behalf of the University Community at the Regional Launch of the Hands Off Our Girls Campaign at the Wusum Stadium in Makeni, the Vice Chancellor and Principal of the Ernest Bai Koroma University of Science and Technology, Rev. Prof. Edwin J.J. Momoh, calls on stakeholders to   desist from behaviors that will distract girls from school and that they should help in making girls responsible citizens who will contribute toward the development of Sierra Leone.

Acknowledging the day’s importance, he said that launching of the ‘Hands off Our Girls Campaign’ in October 11 was important because the day marks the commemoration of the International Day of the Girl Child.

The Professor said that about 62 million girls (including girls in Sierra Leone) are denied access to Quality Education which is the result of various challenges girls face globally. “Denying girls access to education exposes them to early marriage, teenage pregnancy, child prostitution, sexual penetration, intimidation among other problems,” he continued.

He used the event to thank Her Excellency, Mrs. Fatima Maada Bio, for launching the “Hands Off Our Girls Campaign” which, according him, will create space for girls to be focused and committed to their academic work as this will help the “Free Quality Education” initiative by H.E Bio yield its desired goal.

He continued to say that, despite the amazing initiative by our First Lady and the growing number of awareness on girls’ rights, the challenges to girls’ empowerment is still appalling and we cannot be blind to this sad reality. Therefore, as a member of the academic Community, I will suggest two solutions to problems of sexual harassment and intimidation in our learning institutions.

First, male teachers should acknowledge that they have failed the nation and begin to act as parents to pupils & students.

Second, parents should stop seeing/using their children as business guarantors.

Reiterating his commitment to the campaign, the Professor said that girls should be allowed to be girls and NOT ‘ pekitos’. “Today, as we commemorate this day, let us begin by committing ourselves to taking our girls seriously. We need to believe in the fact that they are our future and that if Sierra Leone is to progress, we must invest in girls. They must be given the opportunity to be educated and to believe in their abilities. Let us make conscious efforts in protecting our girls and making them believe that their future belongs to them and not tied to any man’s success because they have everything required to be successful like men. We should also make them believe that boys/men are not their targets but rather their counterparts in national development who can do anything just like boys.”

As a testament of endorsement of Her Excellency’s Campaign, various statements were delivered by dignitaries such as Her Worship the Mayor of Makeni City Council; Madam Sunkarie Dan Kamara, Hon Minister of Basic and Secondary Education; Hon. Alpha Timbo,  Dr. Kim Dickson of UNFPA, Claudia Campbell representing the girls of Bombali District etc.

A statement and official launch of the ‘Hands off our Girls’ campaign by Her Excellency, Mrs. Fatima Maada Bio formed high point of the ceremony. 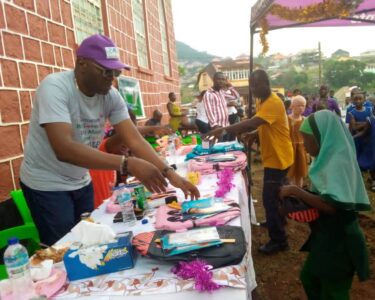