AIG Samadia on Safety and Security 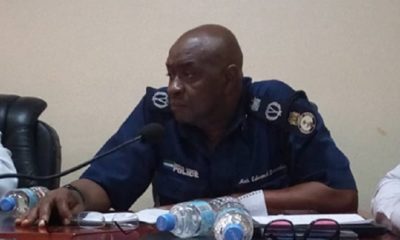 Assistant Inspector General Samadia has used the previous Cleaning Saturday not only for his gallant officers to assist the Freetown City Council to clean-up the Municipality of Freetown of garbage’s but to also get rid of hard-core criminals in the Peace Market (Ferry Junction), Bomeh, Duallah (Kissy Brook), and its environs.

The raids and big catch of hard-core criminals in the above areas is a step in the right direction as peaceful Sierra Leoneans have been suffering in the hands of hoodlums who had apparently got a field day in their operations of dispossessing the hard earned possessions of community members.

The raids was well coordinated and executed by the AIG and his gallants officers with the aim of restoring sanity, peace and tranquility in the communities that have been affected criminal activities.

The Operations Officers and OPS Personnel  in the Four Police Divisions in the Freetown East Region and the OSDs at Jui backed by the Regional team at Ross Road under the astute leadership of  AIG Aiah Edward Samadia successfully targetted and arrested identified hard-core criminals with substantial exhibits in the early hours of Saturday morning.

Mr. Samadia is been praised and blessed for his tactfulness, promptness and assertiveness in solving crimes and criminals related issues within the Region.

This brings to mind the Headman Elections that was recently held in Waterloo where residents of the community trooping out of their houses publicly praising-singing the Sierra Leone Police for the security provided for the elections at Waterloo and Cole town communities.

Similarly, at Kissy Brook, Peace Market, Duallah and Bomeh, community members openly commended the Sierra Leone Police for the good work and hope they will continued to replicate such in other prone communities.