It’s no longer a secret that Africell mobile company is the leading network service provider in the country, not only for its expansion, but importantly for the quality service and the number of subscribers and institutions using the service across the country.

Official data from the just concluded 2019 annual school census organized by the Ministry of Basic and Senior Secondary Education (MBSSE) clearly indicates that of the nine thousand six hundred and forty (9,640) schools that reported having mobile telephone network coverage in the country,

The data collection includes the number of schools in each level of education and number of pupils by regions, districts, chiefdoms, number of teaching and non-teaching staff, with years of experience of teachers and qualifications, photos of school infrastructure and facilities including their state of use, teacher photo verification, location of schools with the use of GPS, standards of WaSH facilities and the level of telephone connectivity in each school. 47% percent of that figure use Africell network service regularly.

The choice of Africell network by subscribers, private or public institutions is by no means a mistake as people wants value for their money. This means that Africell provides quality service in terms of interrupted internet service in addition to the several promotions held for its subscribers over the years.

The census collected highlights not only on the availability of the mobile telephone network coverage but also on the type of service provider around the school area.

The analysis by district also provides an opportunity to get an idea of which district in the country have high coverage of network and connectivity.

The data shows that there is generally high network coverage in the schools ranging from 38% in Falaba district to 98% in the entire Western region.

The report shows that five out of the sixteen districts have 90% and more mobile network coverage in schools within their districts. The report states that the knowledge and introduction of information communication in schools will help improve the learning outcomes especially in this digital age where everything is done using computers.

Since the Company started operations in the country in 2001, it has stood the test of time to compete in the telecommunications industry, beating rival service providers in almost every aspect including but not limited to the provision of quality and reliable network, fast internet service, low data tariff and expansion of coverage among others.

Africell has established itself as the market leading operator in Sierra Leone.

STATEMENT BY THE COMMISSIONER OF NaCSA ON WORLD REFUGEE DAY 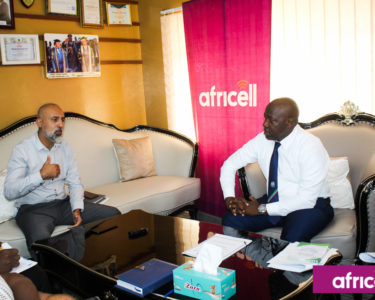